Making a reliable key to distinguish Phyllonorycter maestingella, esperella, dubitella, coryli, cerasicolella and spinicolella on external features has proved to be problematic. All of this group have a ground colour which is somewhat variable between orange and brown; 4 costal and 3 dorsal white strigulae; C1 and D1 not meeting to form a complete fascia and forming an acute angle with each other; a white line at the lateral margins of the thorax (and /or dorsal margin of the teguale) "continuous with" a basal white streak extending at least to the dorsal origin of D1 and usually to ~half-way along D1; a white median thoracic line “continuous with” a white dorsal streak of variable extent; a black apical streak of variable extent and a largely pale antenna, the terminal segment or two commonly dark. There is intra-specific variation in ground colour, extent and boldness of black edging to the strigulae and basal streak, extent and boldness of the apical streak and extent of the dorsal streak - and further variation occurs with wear.

P.esperella (labelled image below) is nearly always noticeably orange and may be distinct in having C1 extending proximally for a short distance along the costa. It also has a contrastingly white caudal tuft at the apex of the abdomen and this may help distinguish it from P.maestingella, at least, in which the dorsal portion of the caudal tuft is brownish-fuscous
P.maestingella may also be distinct in having a relatively short basal streak, usually reaching to but not much beyond the dorsal origin of D1.

However, for now, I regard the whole of this group as requiring genital determination. 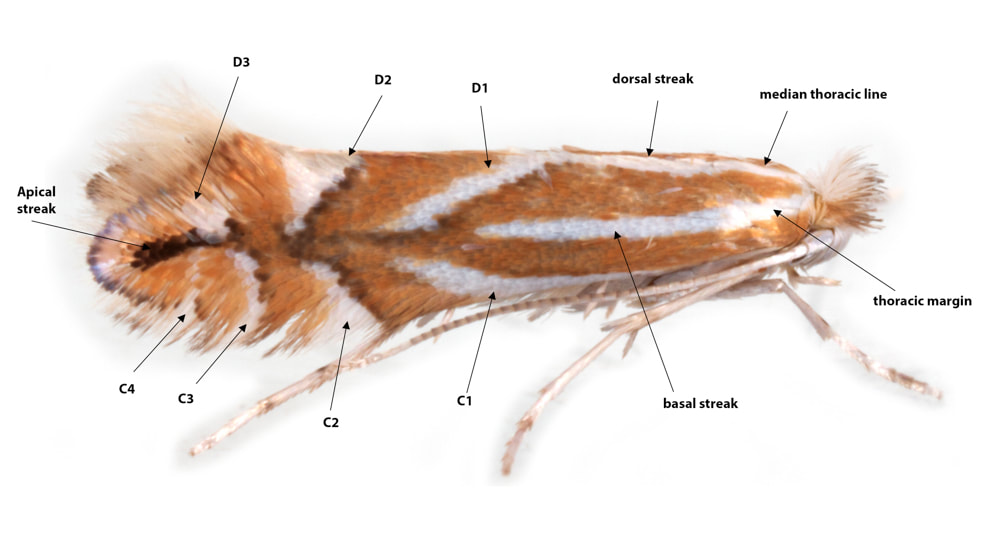 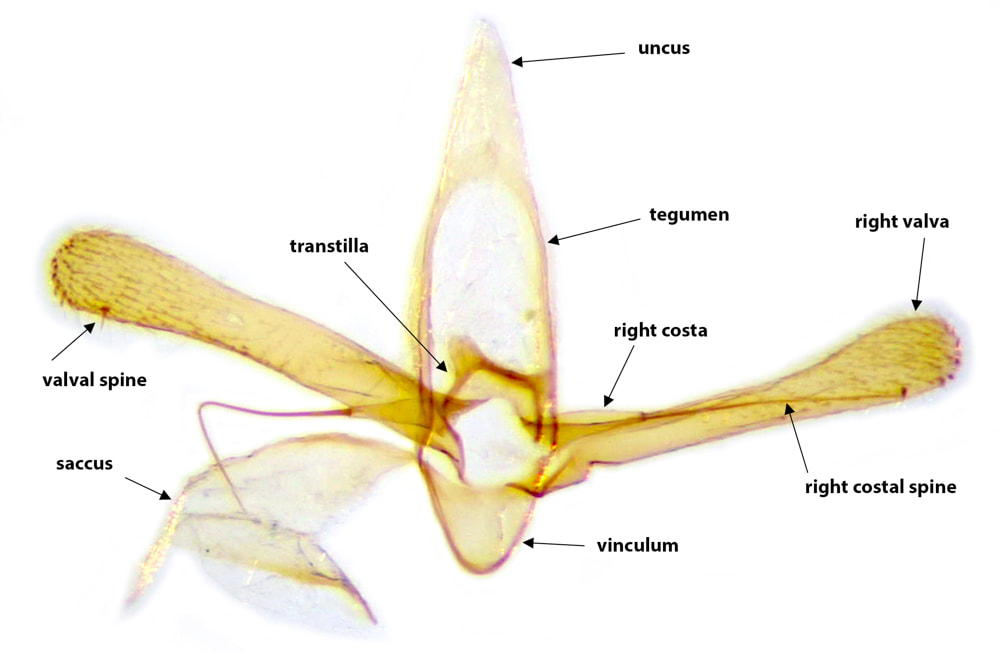 The general arrangement of Phyllonorycter male genitalia is illustrated above (P.maestingella). The main features useful in identification are the costae and costal spines and the valvae and valval spines. These features are often asymmetrical, but within the group under consideration only P.dubitella has distinctly asymmetrical valvae; all the other species have more-or-less symmetrical valvae, costae and costal spines. In the table below a spine is long if it is clearly longer than the costa it arises from and short if it is about the same length as the costa. P.coryli is distinct in having both short costal spines and short valvae, so that the costal spine extends as far as the apex of the valva. P.esperella is the only remaining species in which the costal spine is short and in this species the spine does not reach half-way to the valval apex. The remaining three species have long costal spines - in P.maestingella the spine does not quite extended as far as the valval apex while in P.cerasicolella and P.spinicolella the spine is very long, extending beyond the valva apex. These three species all have a subapical valval spine, but in P.maestingella this spine is very small. P.cerasicolella and P.spinicolella can be separated by the presence of prominent bristles along the ventral valval margin in P.cerasicolella, these being present to only a minimal extent in P.spinicolella.
The "saccus" of Phyllonorycter does not seem to be homologous with the saccus of other Lepidoptera. In most Lepidoptera the saccus is clearly part of, or an extension from, the vinculum; in Phyllonorycter it is easily detached and may actually be integumentary in origin (derived from ventral plate of S8?).
Phyllonorycter genitalia are very fiddly to prepare - I await better material before these differences will be illustrated here.
Female genitalia
Page published 27/02/2020