Coleophora betulella §1 female
ID: Group H - Forewing ground colour white, antennal scape with a well-developed tuft > 5 species
No dark line in costal cilia; forewing with veins marked fuscous/ochreous, often indistinctly; labial palps white > C.betulella
Female genitalia: C.albidella, C.anatipennella, C.ibipennella and C.betulella all have an incised posterior margin of the subgenital plate, a sclerotised introitus that narrows at its point of junction with a heavily spiculate posterior section of ductus bursae, a sclerotised 'tail' extending anterior to this spiculate section and a moderate to large thorn-like signum. These 4 are very similar and it is hard to discern consistent differences between them from the drawings in MBGBI3 and the images at Moth Dissection.
C.albidella shows rounded lateral margins of the subgenital plate: this distinction is labelled as occurring at the "posterior edge" of the SGP in the image at Moth Dissection, but it is the lateral margin that is arrowed. This may also be problematic because the ventral "subgenital plate" is continuous with a dorsal plate, together forming a ring around S8 - in the conventional slide preparation this ring is squashed flat and the exact shape of the margins may vary with the degree of compression and the ability to position the ostium centrally.
C.anatipennella and C.ibipennella both have very short anterior apophyses (<½ length of SGP); In C.betulella the anterior apophyses are about as long as the SGP. Differences in the signum as drawn in MBGBI3 cannot be confirmed from the images at Moth Dissection - where the signa all look very similar (except that of C.albidella which is not shown). I have been unable to discern any consistent differences between these 4 species in the relative proportions of the sclerotised introitus, spiculate ductus bursae and sclerotised "tail". C.ibipennella may have a smaller more "V"-shaped ostium than the other species - but the exact shape of the ostium of all these species is not consistent between the various available images and diagrams.
§1 is very worn and is the first female I have examined of these 4 species - it is a bit small for C.anatipennella and lacks the dark-tipped apical cilia it usually shows; its antennae appear too distinctly ringed for C.albidella and the SGP does not have a rounded margin; it lacks the dark basal line on the forewing costa shown by C.ibipennella and the ostial incision appears too large for that species. On balance of probability I think it is C.betulella - it is the right size, was found in suitable heathland habitat, lacks forewing markings suggesting any of the other species  - but the anterior apophysis are shorter than is seen in the images and drawings of this species - so this ID is somewhat tentative.
Dissection 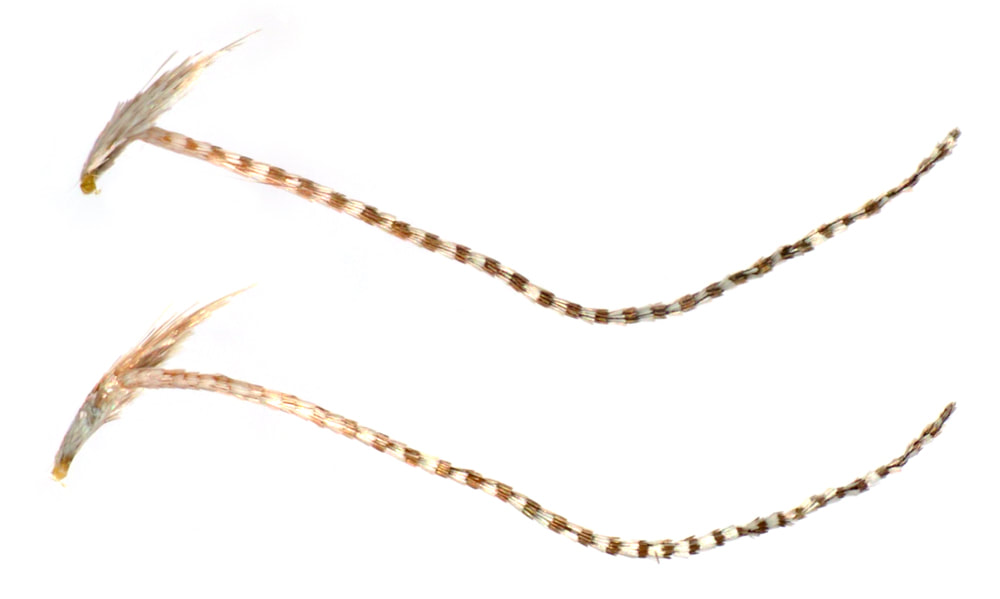 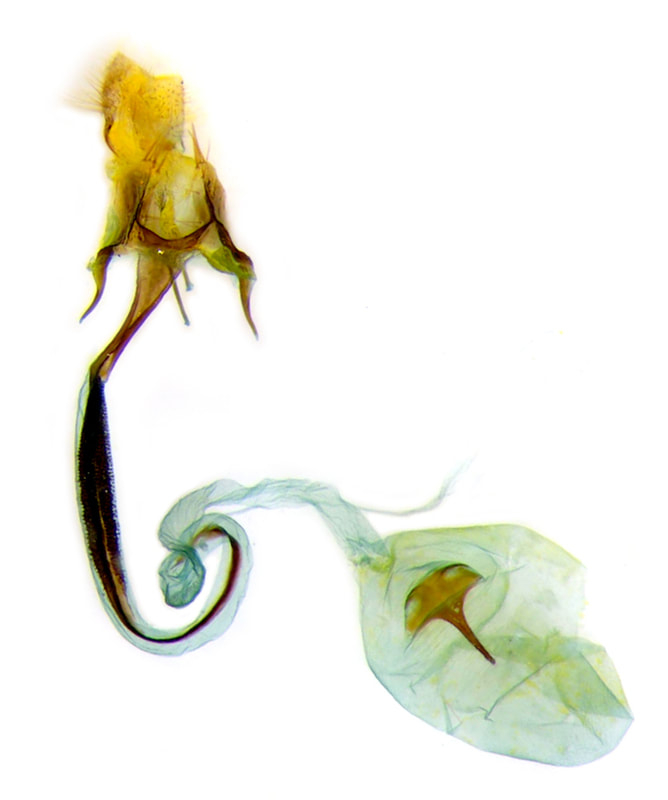 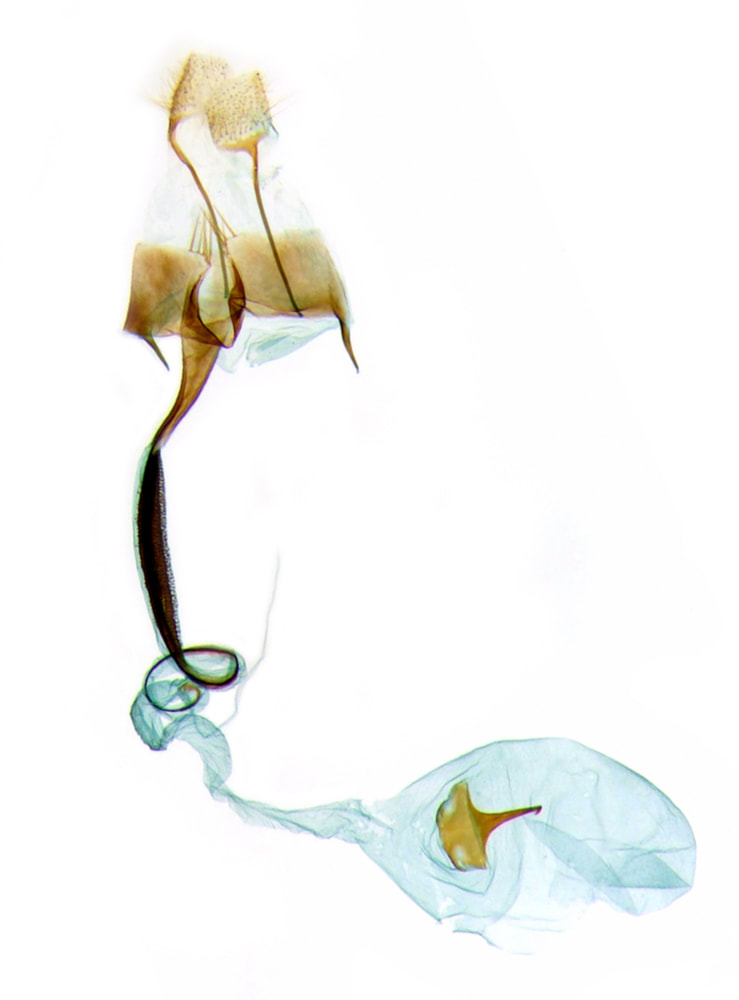 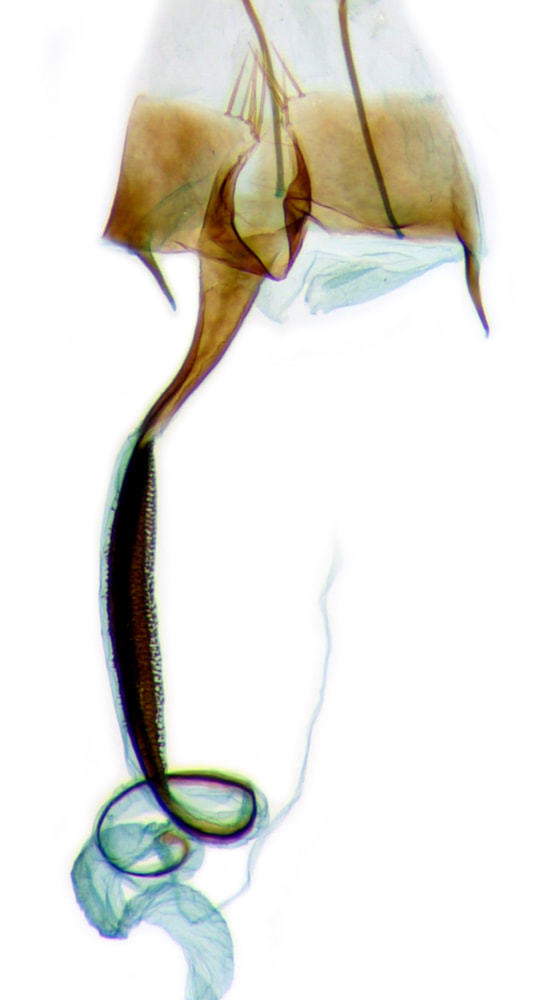 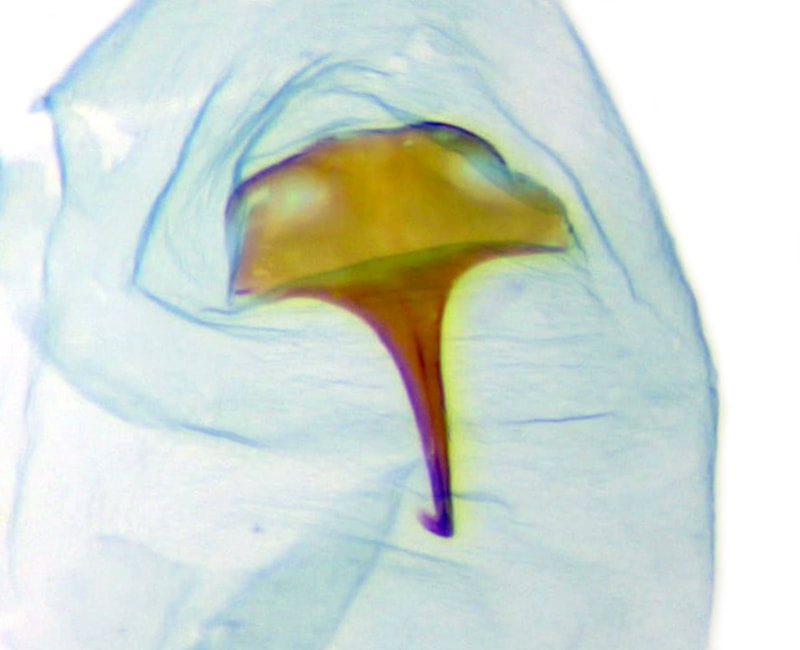