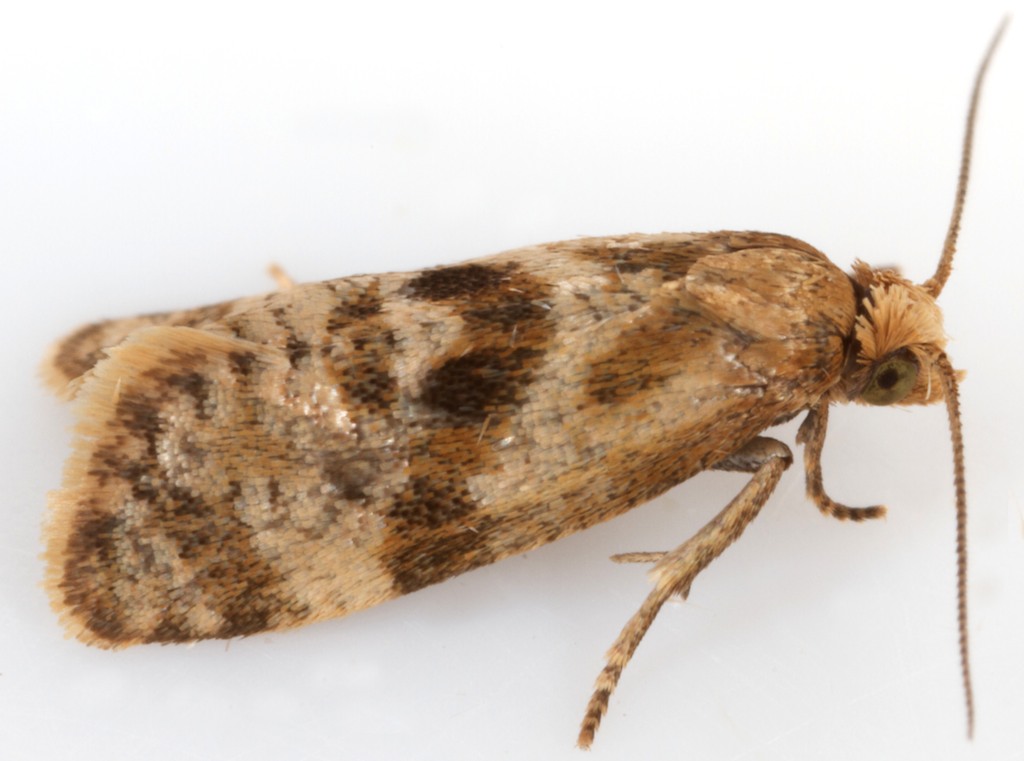 Gynnidomorpha vectisana §1 male
ID: The 5 Gynnidomorpha species are similar and on external appearance Phalonidia manniana also needs to be considered.
Combining features given in BTM and by Sterling & Parsons, the critical features are:
P.manniana - ws: 10-13mm, fw: 5-6mm; light ground colour, contrasting blackish admixture in dorsal part of median fascia; fasciate preapical marking well-defined and reaching tornus.
G.minimana - ws: 11-14mm, fw: 6-7mm; more angulate median fascia (than G.alismana)
G.permixtana - ws: 10-12mm; fw: 5-6mm; blackish-grey suffusion in middle of distal margin of median fascia, grey suffusion in distal half of forewing; greyish or brownish shading along the costa, especially in basal half.
G.vectisana - ws: 9-11mm, fw 4-6mm; small size, olive-brown general colour, reticulation in distal area of forewing; ranges from almost unicolorous with obscure markings to well-marked with a strongly developed median fascia and preapical spot.
G.alismana - ws: 11-14mm, fw 6-7mm; less angulate median fascia (than G.minimana), preapical spot strigulate or fractured in tornal area
G.luridana - ws: 11-13mm, fw 5-6mm; comparatively uniform whitish-ochreous ground colour, pale ochreous-brown markings
Male genitalia: Pierce & Metcalfe refer to Gynnidomorpha as Genus 18 and comment: "this genus has given infinite trouble in the past as regards the identity of the species. The genitalia now offer a certain amount of security...... Valva long, delicate; costa and sacculus very weak; transtilla a central arm curved, indent; saccus practically divided. Uncus absent; socii well developed and firm, the chief specific character. Aedeagus cardinate, sigmoid, pointed. Cornutus a single spine". They then describe the profile of the socii for each species:
G.alismana - "..broad, slightly arched, and quickly reduced to a point set with fine hairs"
G.luridana - "..broad, very slightly arched, scarcely reduced to a rounded point set with long, stout hairs"
G.vectisana - "..broad, gently arched and tapered to a point set with short, stout hairs"
G.minimana - "..broad, acutely arched, emarginate to a point set with fine, short bristles"
G.permixtana - "..broad, acutely arched, tapered to a point set with fine, short bristles"
Only G.alismana is shown at dissection group
Specimen §1 was obtained by day on a walk along the coastal path on the Isle of Wight between St Lawrence and Ventnor. It has fw 5.1mm.
The male genitalia confirm it as a Gynnidomorpha species. G.minimana can be excluded definitively by the shape of the socii which lack the acute angulation and emargination shown by that species; and probably by size and the weakly angulate median fascia. Size and possibly the costal shading in the basal half of the forewing could favour G.permixtana - but the descriptions seem quite clear that the blackish suffusion in the centre of the median fascia should only be at its distal margin instead of across the whole width of the fascia and the socii are definitely not acutely arched so this species can be excluded. Without good comparative images it is difficult to assess which of the described socius forms best fits that found for specimen §1. It should be too small for G.alismana but its pre-apical spot does seem to become strigulate towards the tornus and most web images labelled as G.alismana show a black mark in the median fascia at about 1/3 from the dorsum 2/3 from the costa, as shown by this specimen. The socii in the image below are more angulate and less evenly tapered than those shown in the image of this species at Dissection Group. G.luridana can probably be excluded on the basis that the ground colour is not a uniform whitish-ochreous and the markings are are clearly darker than pale ochreous-brown. G.vectisana is favoured by the reticulation in the distal area of the forewing. The description of the socii probably most closely resembles that for this species and this is the only one of the 5 species known to occur on the Isle of Wight. I think the ID is reasonably safe but will review it when further Gynnidomorpha specimens become available.....
Specimen §2 was obtained at the same time as §1 and is an extremely worn female but the genitalia seem a good fit with the illustration in MBGBI5.1
<
> 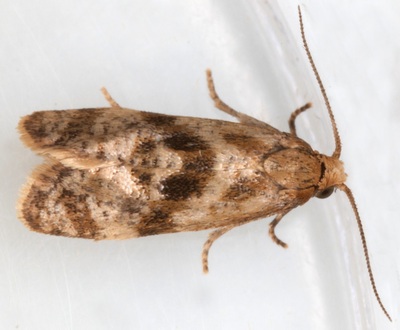 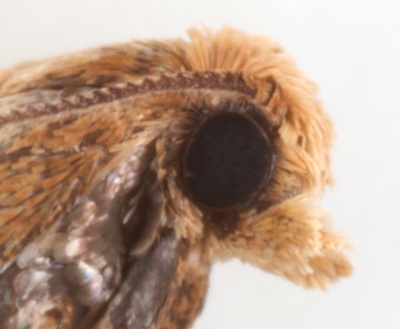 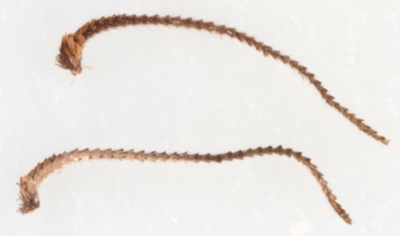 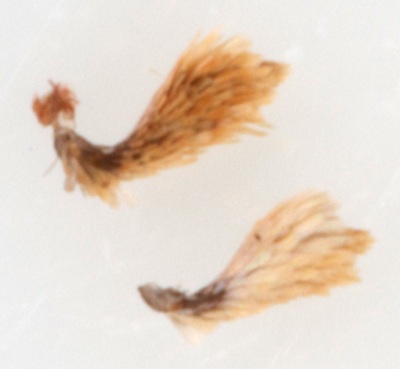 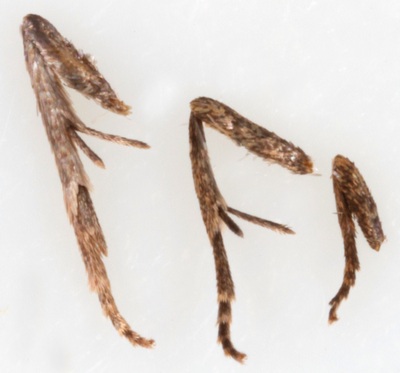 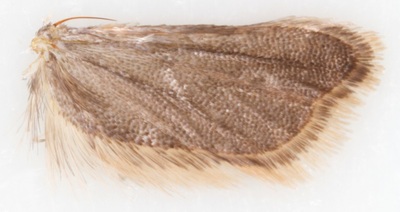 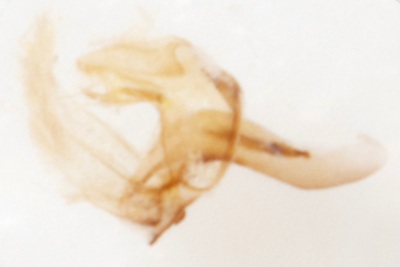 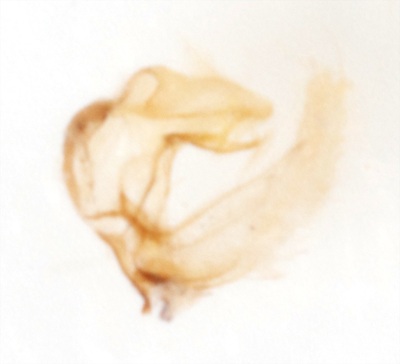 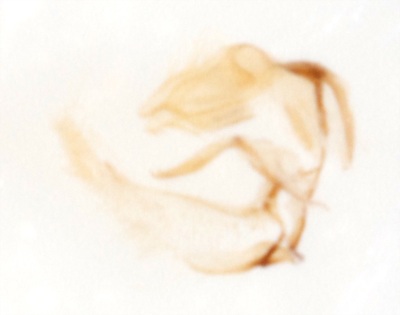 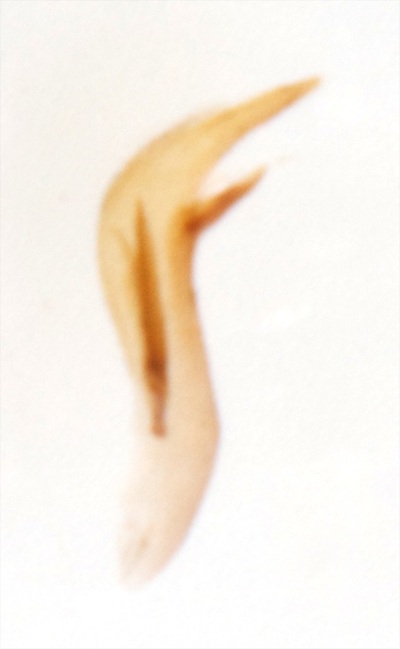 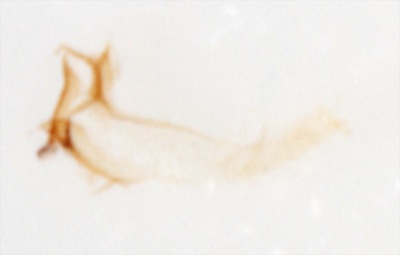 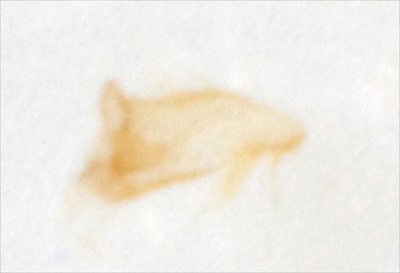 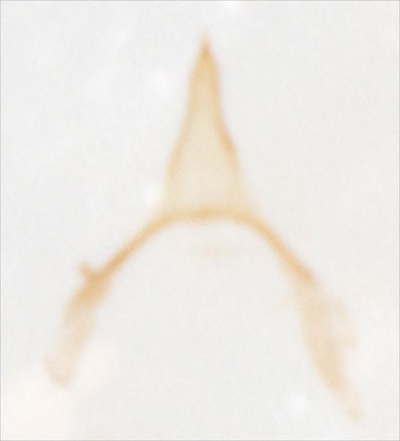 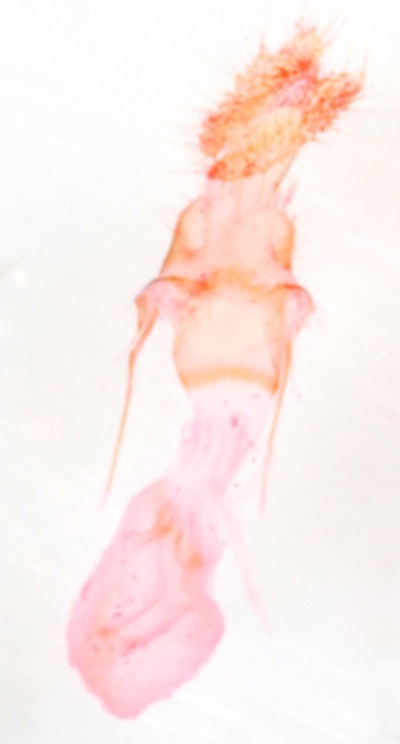