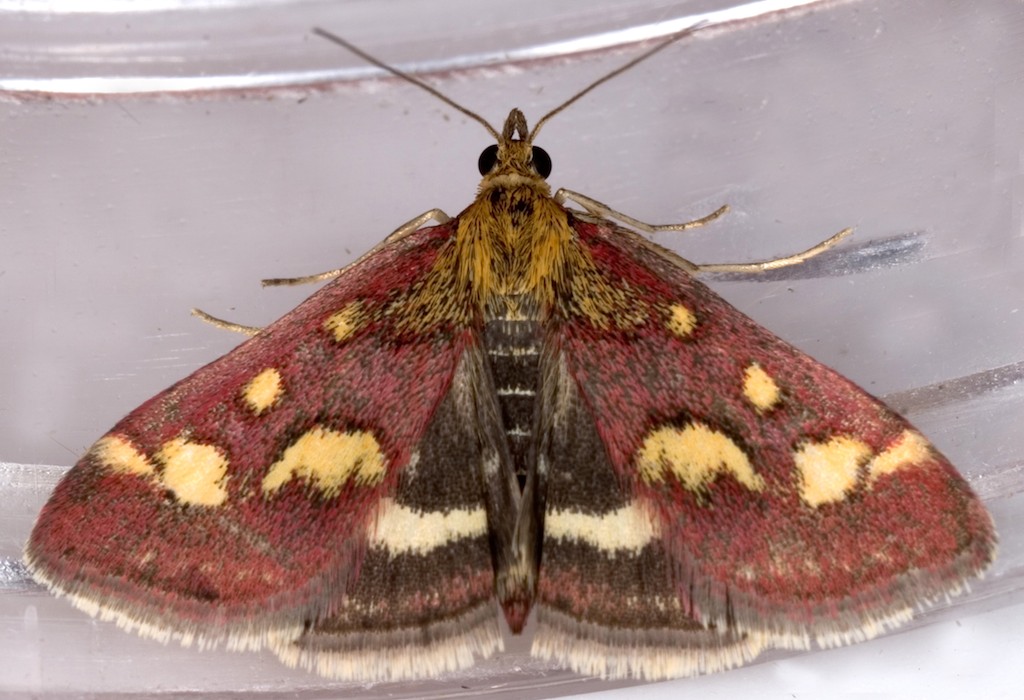 Pyrausta purpuralis §1
ID: Similar to P.aurata. Both can be bright purple with golden markings (when fresh) or brown with yellow markings (when worn). According to UKMoths: In P.aurata the only consistent postmedian mark is a round golden blotch near the costa (subcostal blotch) and there is usually a small golden mark between it and the costa (costal blotch). Marks between the subcostal blotch and the dorsum are variable. In P.purpuralis the postmedian markings may form a continuous band from costa to dorsum, but more often it is broken into 3 substantial marks (in which case the marks near the costa are similar to those in P.aurata). In P.purpuralis the mark near the dorsum (dorsal blotch) is (always?) more substantial than any mark that may be present in this position on P.aurata.
According to Hants moths the two species cannot be reliably separated on forewing features.
I would like to propose the following for further field testing: If there are no or minimal postmedian markings between the subcostal blotch and the dorsum it is P.aurata. Where there is a continuous unbroken postmedian band it is P.purpuralis (or P.ostrinalis). Where there are broken postmedian markings between the subcostal blotch and the dorsum: in P.aurata a narrow wavy line will meet the dorsum and is positioned at the same distance from the tornus as the costal spot is from the apex; any substantial subdorsal blotch will be proximal to this line, smaller than the subcostal blotch, and there will be a clear margin of ground colour between it and the dorsum; in P.purpuralis there is no narrow wavy line, though the dorsal blotch usually has a wavy distal edge; the dorsal blotch meets or almost meets the dorsum and is sited at a greater distance from the tornus than the costal blotch is from the apex. P.purpuralis (and P.ostrinalis) may show a weak subterminal line, (always?) lacking in P.aurata.
In the hindwing P.aurata shows an unbroken curved yellow postmedian line, which often does not meet the costa or the dorsum, and no basal marking. P.purpuralis (and P.ostrinalis) show variable basal markings.
P.ostrinalis has a narrower forewing and paler yellow markings than P.purpuralis. Goater gives a more absolute distinction between these species based on the underside: "the pale subterminal line in P.purpuralis is nearly straight and fades before the costa, whereas in P.ostrinalis it curves to meet the postmedian line at the costa". We are left to infer that he is talking about the forewing. It is left unclear whether the subterminal line is always present in P.ostrinalis. The drawings in Goater also show a subterminal line present on the underside hindwing of P.ostrinalis but not in P.purpuralis.
Goater states that the hindwing cilia of P.aurata are white while those of P.purpuralis and P.ostrinalis have a dark fuscous basal half and a greyish white apical half - this does not seem to provide a valid distinction between the species.
Male genitalia: dissection group gives images for all three species but I have not seen descriptions. Differences between the P.purpuralis and P.aurata noted by comparing images are as follows, features for P.aurata are given first: 1, Uncus - fairly clearly demarcated from tegumen, narrow, elongate ~3x longer than broad, parallel to just before an apical point vs not clearly demarcated, broad, gradually narrowing to a rounded apex; 2. Margin of vinculum between apex (saccus?) and ventral margin of valva: concave vs convex (though this could be an artefact); 3. Structure sited on the surface of the valva in its proximal half the name of which I do not know: isosceles triangular with a short side distally, pointed basally vs even width, bluntly quadrangular. Goater states that differences between the genitalia of P.purpuralis and P.ostrinalis are slight but comparison of images suggests that P.ostrinalis is intermediate between P.purpuralis and P.aurata:
Female genitalia: differences appear in the shape of the signum and in the sclerotisation of the introitus vaginae/posterior ductus bursae as shown in the images at Dissection Group of P.aurata/purpuralis/ostrinalis, but at this time I am uncertain whether these differences are real or artefactual.
<
> 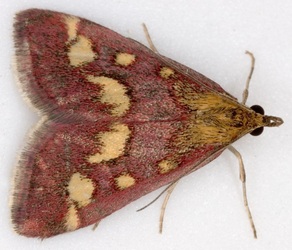 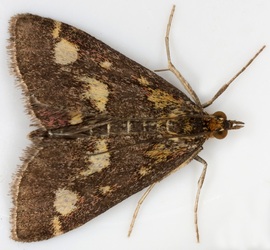 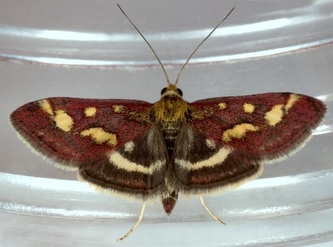 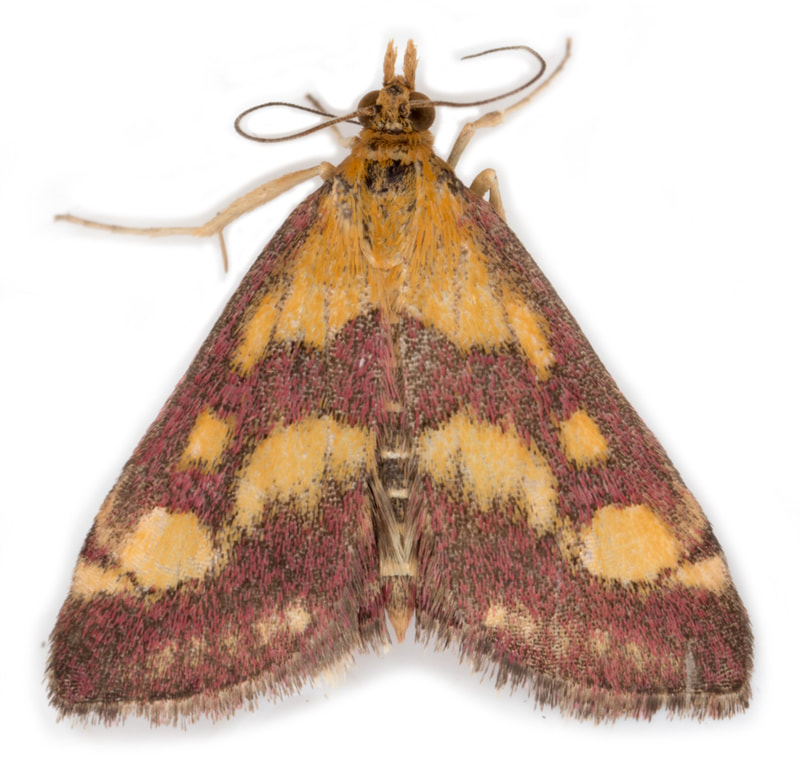 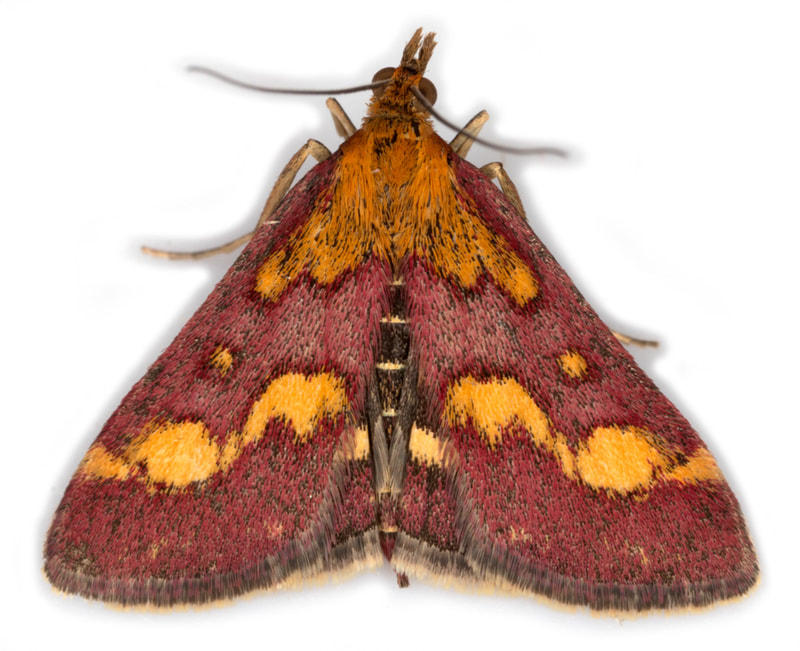 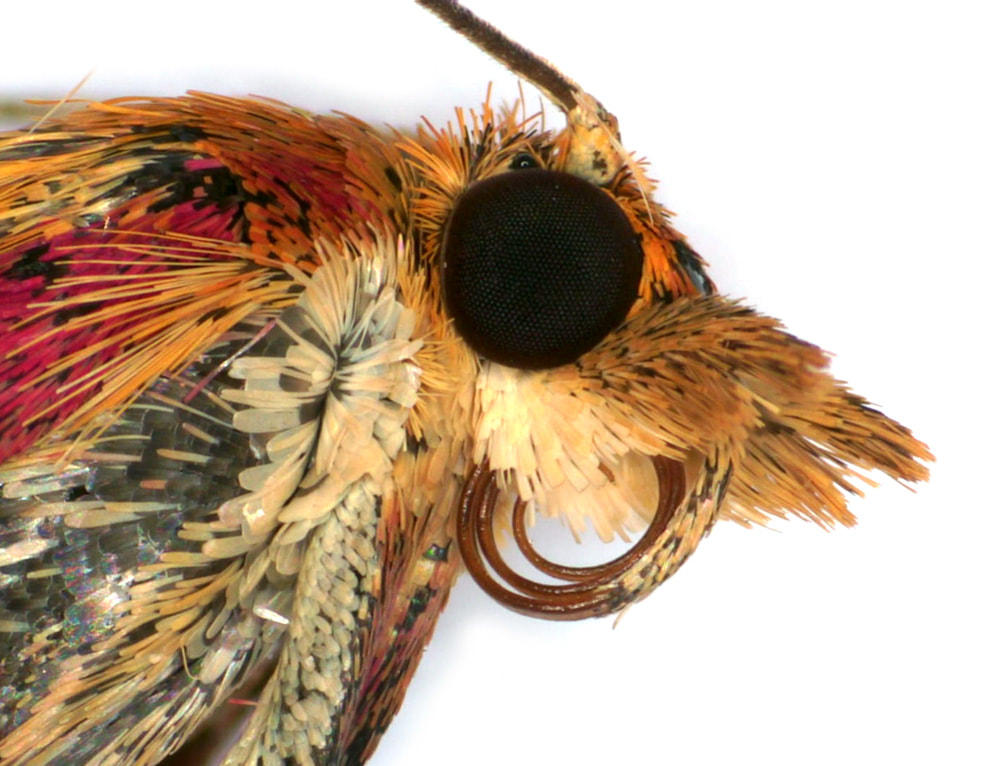 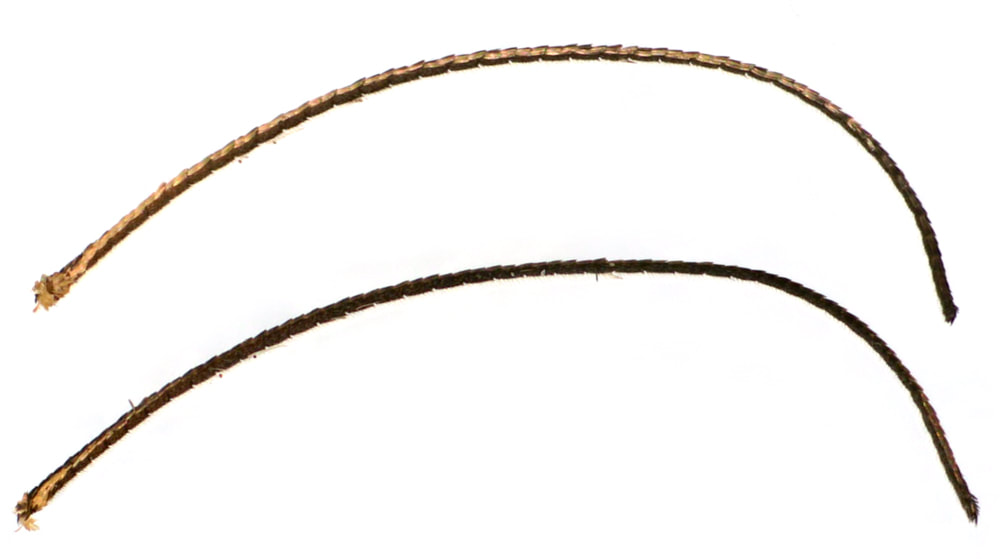 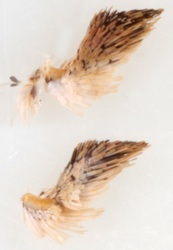 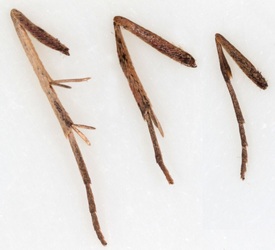 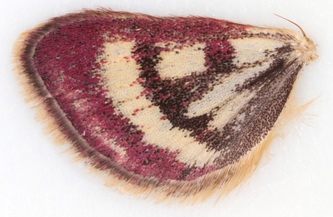 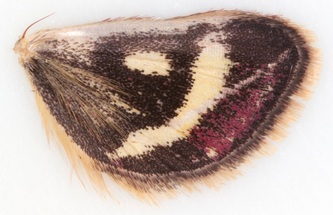 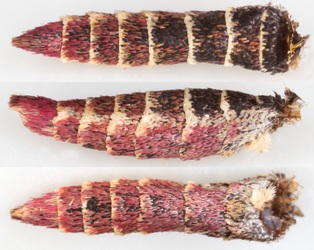 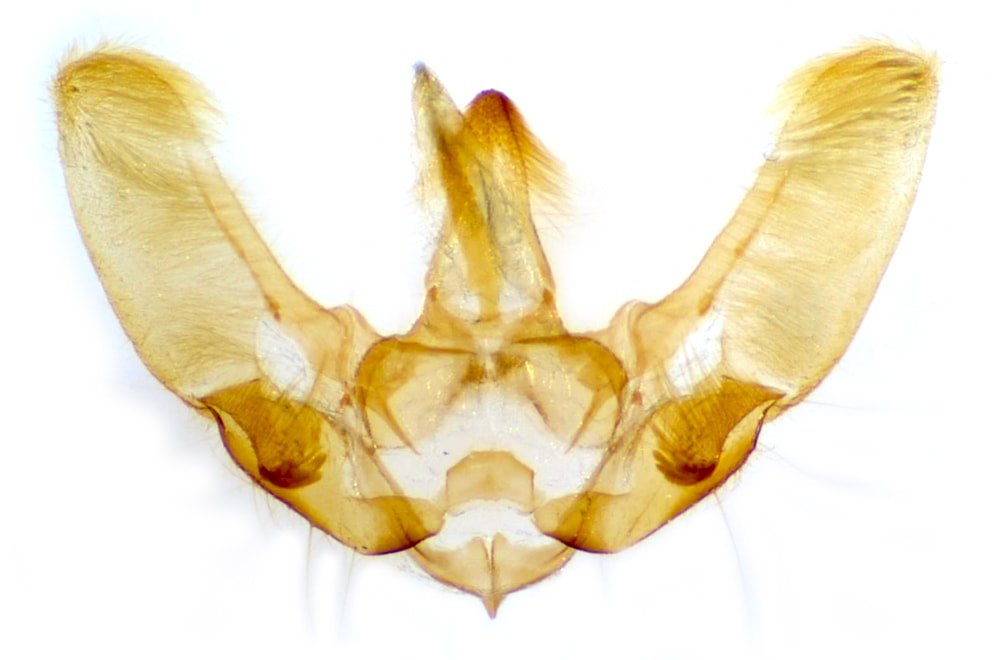 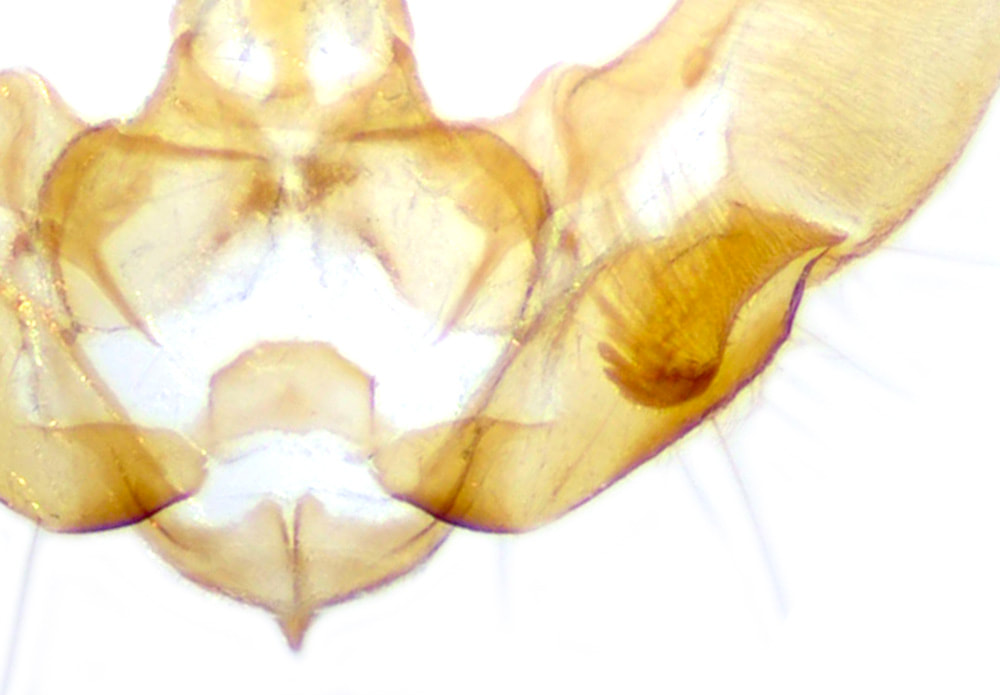 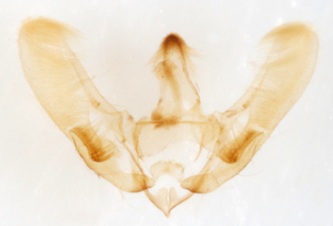 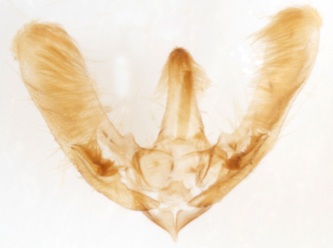 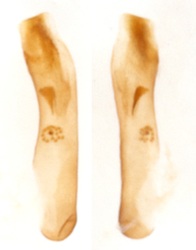 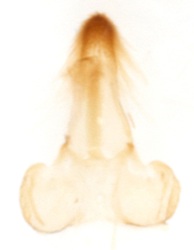 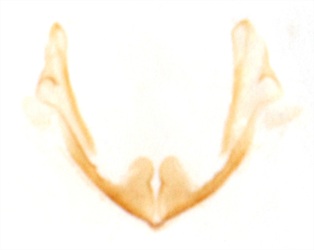