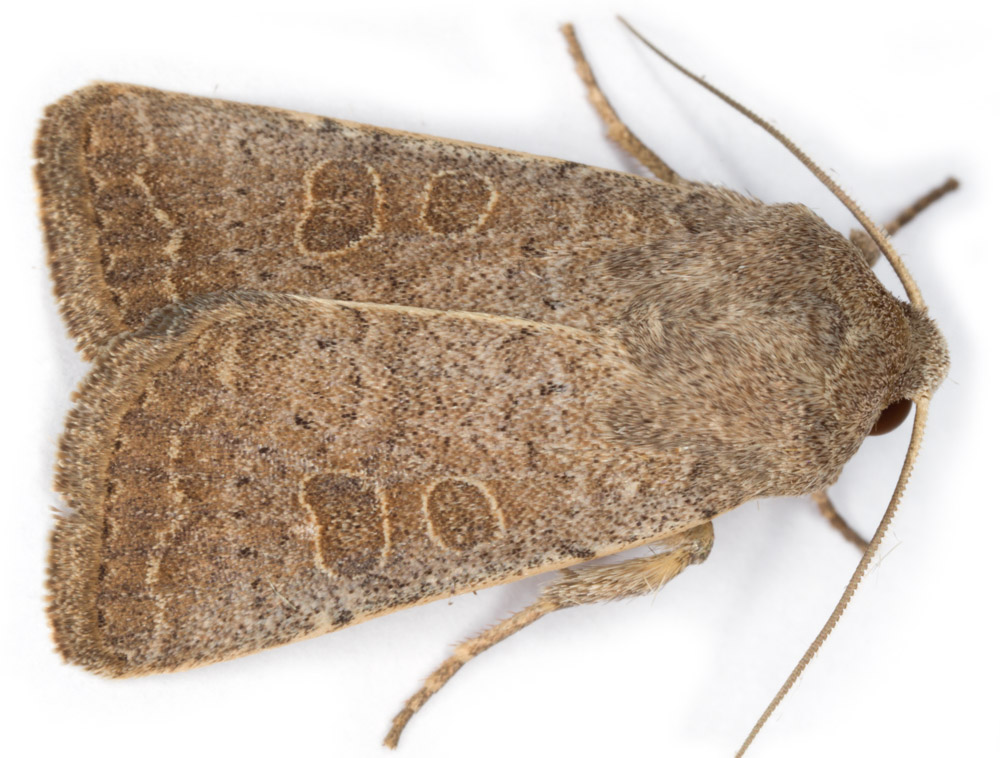 Hoplodrina ambigua (Vine's Rustic) §4 male
ID: Forewing ground colour variable from pale grey to dark brownish-grey with a pale grey dusting. Stigmata larger and more rounded than in H.octogenaria/blanda (Uncertain/Rustic) and hindwing paler whitish (brownish-grey in male and grey in female H.octogenaria, greyish-white to grey in H.blanda). Usually lacks a median cross-band (present in H.octogenaria). Could be mistaken for Orthosia cerasi (Common Quaker), which has a more rounded forewing apex; larger, rounder stigmata that almost touch; a strong slightly diagonal pale subterminal line; usually a diffuse median cross-band; and a grey hindwing. H.ambigua is also distinguished in the male by the antennal cilia which, in the central portion of the antenna, are fasciculate (arranged in bundles) and are almost as long as the width of the antennal shaft; in H.octogenaria/blanda the cilia are not fasciculate and are less than half the diameter of the antennal shaft in length. Male H.superstes (Powdered Rustic) has the cilia fasciculate and short. See Difficult Species Guide
See below for genitalia 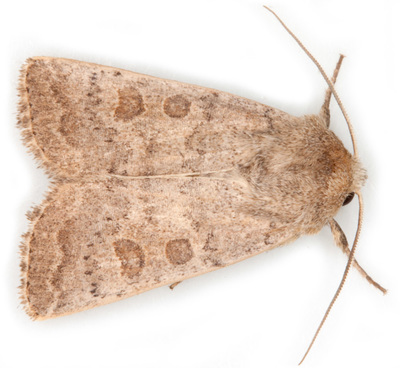 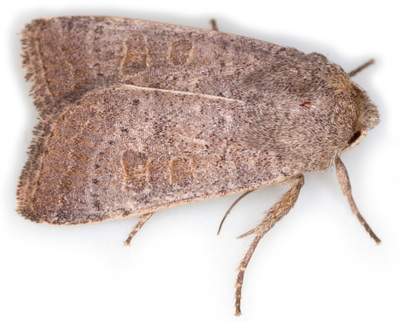 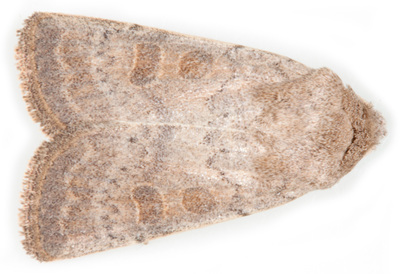 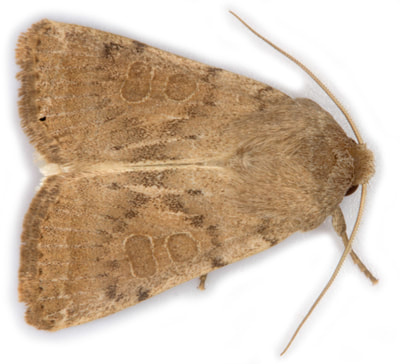 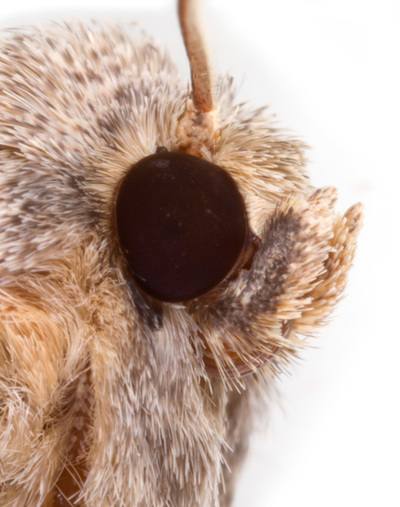 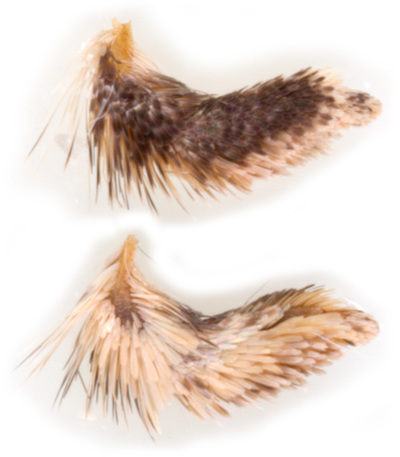 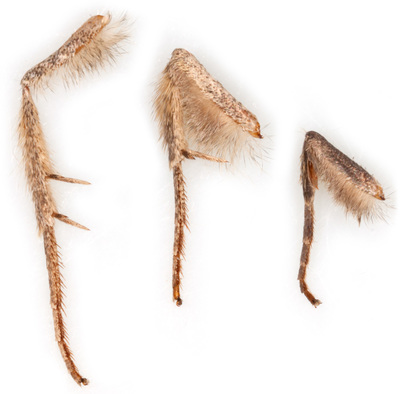 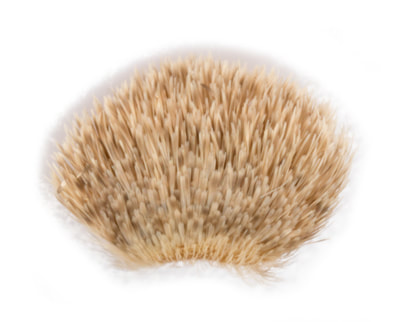 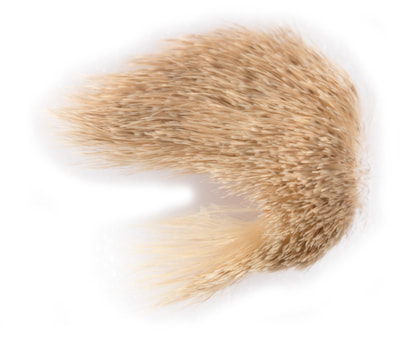 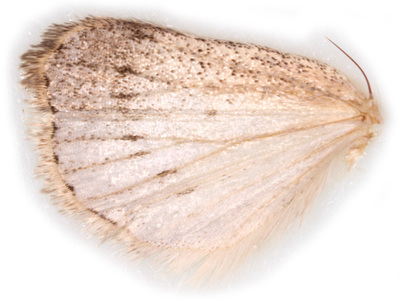 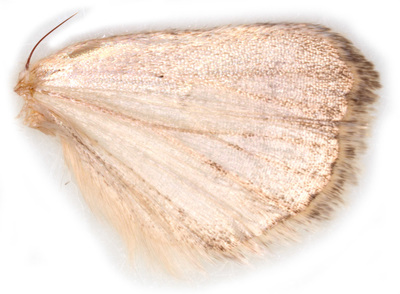 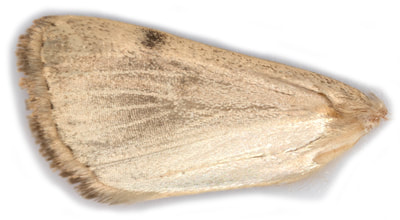 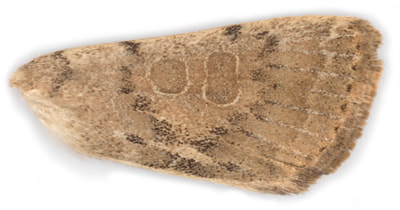 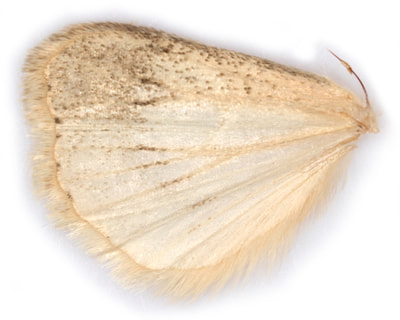 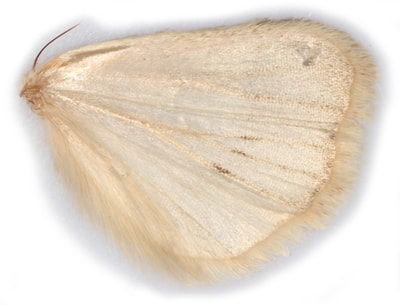 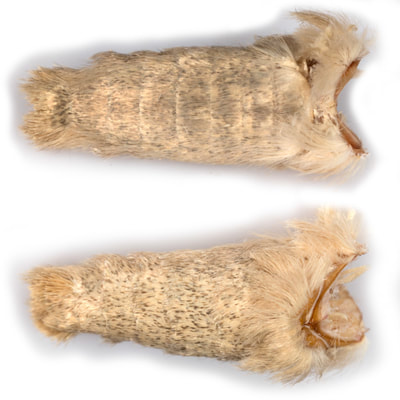 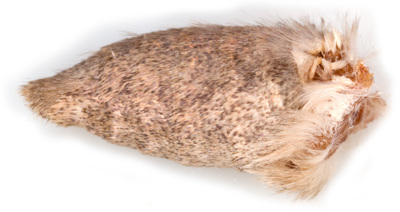 Genitalia of both sexes are illustrated but not described in MBGBI10, shown and described at the Difficult Species Guide, males are shown at Dissection Group with a description of the everted aedeagus, females of H.ambigua and H.superstes, but not H.octogenaria and H.blanda are shown at Moth Dissection (the female images used by DSG are the same as those at Dissection Group).
Male genitalia:  The diagnostic feature is the arrangement of cornuti in the aedeagus. All 4 Hoplodrina species have a large cluster of medium cornuti in the basal 2/3 of the aedeagus and a separate group of cornuti in the apical 1/3. H.ambigua is distinct in having the cornuti in the apical group with 4-6 cornuti significantly larger than those in the basal group (these can be identified without opening or everting the aedeagus)*. In the other 3 species the apical cornuti are similarly sized to the basal cornuti and are arranged in two groups on a diverticulum.* In H.blanda this diverticulum is elongate and the first group (nearest the tunica) consists of 12-20 cornuti; in H.octognaria the diverticulum is short and consists of 5-9 cornuti. The arrangement in H.superstes appears similar to that in H.octogenaria. H.ambigua may be further distinguishable by having a broader more strongly curved 'harpe' than the other 3 species.
* Referring to H.ambigua, DSG states: "everted vesica shows several very large pointed cornuti in basal half". This apparent confusion arises because cornuti which were nearest the apex of the aedeagus become the most basal cornuti when the vesica is everted. The diverticulum on which the apical groups of cornuti are arranged is referred to as the "first diverticulum" by DSG and as the "basal diverticulum" by Dissection Group. 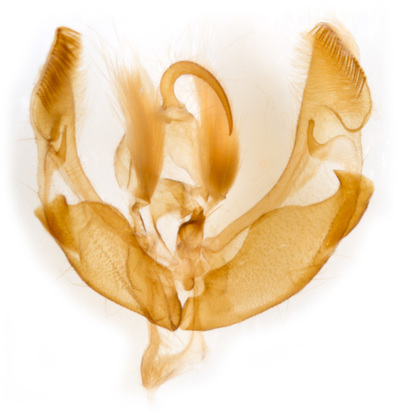 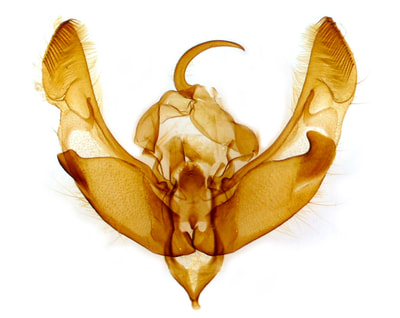 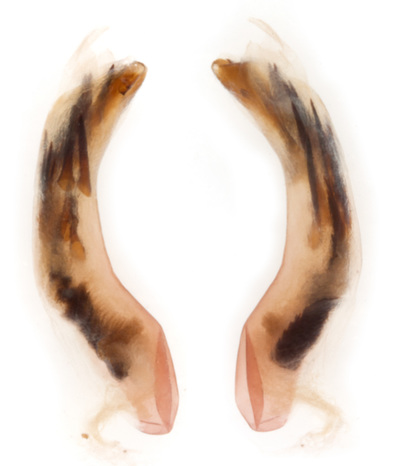 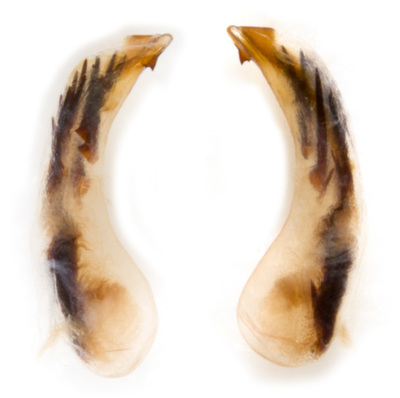 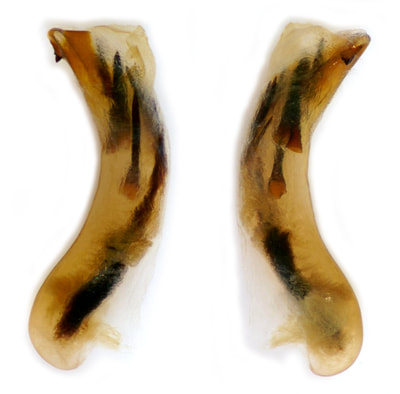 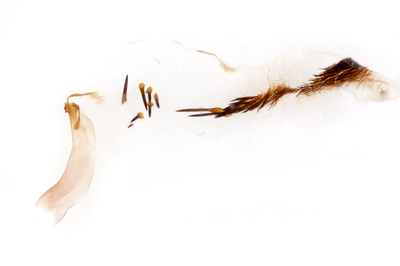 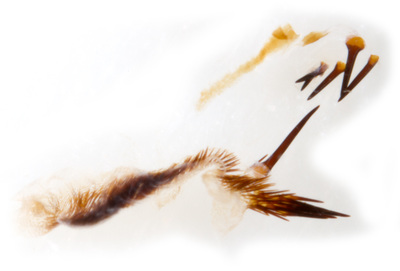 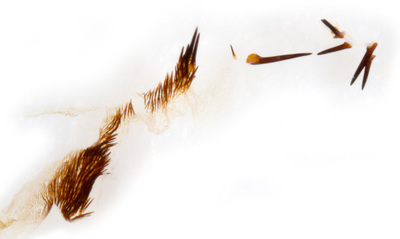 Female genitalia: According to DSG: H.ambigua is distinct in having the "corpus bursae divided into two approximately equal lobes, left and right" while in the other 3 Hoplodrina species the corpus bursae consists of "..a single rounded lobe or with an additional much smaller one". Markings on the DSG illustrations indicate that the lobes referred to are at the posterior end of the CB (near the ductus bursae) rather than a division of the whole CB into two lobes. This difference between the species is not readily perceivable in the MBGBI illustrations. DSG also notes that the DB of H.ambigua is strongly sclerotised; but in the images shown it does not appear significantly more strongly sclerotised than in the other species. The most apparent differences between H,ambigua and the other 3 species from comparison of the DSG images are that the area of sclerotisation at the posterior end of the CB is much less than in the other 3 species and that it is the only one of the 4 with a signum (images of §3&7 conform to this pattern). Again these differences cannot be confirmed from the MBGBI illustrations - which show H.octogenaria as the only one with a signum. This is all rather confusing. 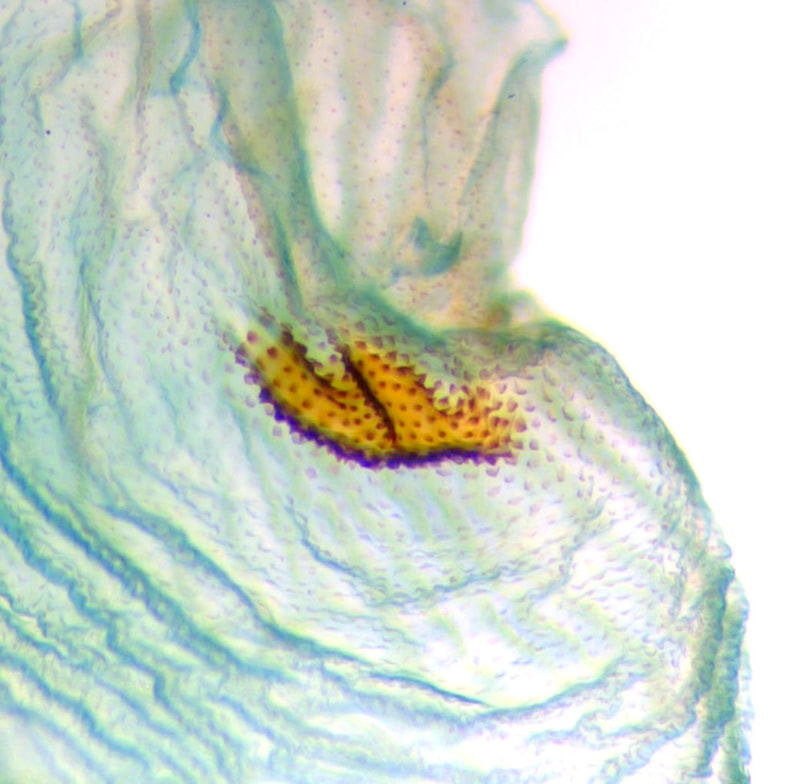 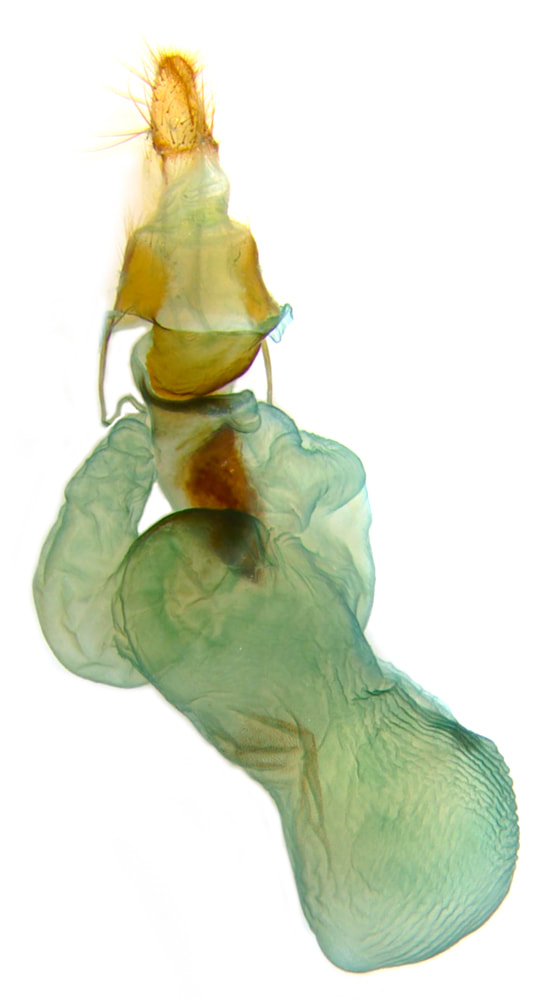 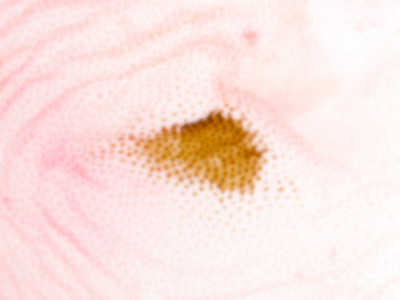