Structures of the Lepidopteran thorax

LEGS: Scaled and (9-) segmented: usually all three pairs well-developed.
Coxa, trochanter (small), femur, tibia and 5 tarsal segments with a pair of articulated curved claws on the 5th (distal, apical) segment
Foretibia usually has an EPHIPHYSIS - a proximally articulated process on the medial surface of the tibia, used in grooming the antennae and proboscis.
Midtibia usually has one pair of apical (distal) spurs
Hindtibia usually has two pairs of spurs, one pair around the middle of the tibia and one pair at its apex.
Variations:
In Family: Micropterigidae the midleg lacks spurs
In Family: Eriocraniidae the midtibia has a singe apical spur
in Family: Hepialidae the midtibia and hindtibia lack spurs; in male Phymatopus hecta the hindtibia is distended and the hindtarsus is missing; in Hepialus humuli the foretibia lacks an epiphysis.
​In Family: Psychidae some species have foretibial spurs
In Family: Ypsolophidae, subfamily: Ochsenheimeriinae lacks a foretibial epiphysis
​
WINGS: The edges of the wing are termed: COSTA anteriorly, TERMEN laterally/distally, DORSUM posteriorly (in the resting position for most species the dorsum of the wing overlies the dorsum of the thorax and abdomen). The costa and termen meet at the APEX. The dorsum and termen meet at the TORNUS.
Both surfaces of both pairs covered in overlapping broad flattened, usually pigmented, sometimes irridescent scales (macrotrichia = "big hairs")
Forewing scales and pigmentation are often distributed in fasciae and stigmata which are variably expressed in different families.
Starting at the wing-base (proximally) the fasciae are termed: basal, sub-basal, antemedian, median, postmedian, subterminal and terminal.
The orbicular stigma (oval) overlies the central part of the discal cell (see venation) between the antemedian and median fasciae.
Similarly placed stigmata, often multiple present in some members of Families Gelechiidae and Oecophoridae are termed discal stigmata
The clavicular stigma (dart) extends from the antemedian fascia towards the median fascia between the anal and cubital sectors of the wing (see venation)
The reniform stigma (kidney) overlies the distal end of the discal cell between the median and postmedian fasciae.
A basal streak extends from the antemedian fascia proximally between the anal and cubital sector of the wing.
A tornal streak extends from the subterminal fascia to the termen in the anal sector of the wing (ie near the tornus)
An apical streak extends from the subterminal fascia to the termen in the radial sector of the wing (ie near the apex)
Androconial scales are present in the wings of some males. These are patches of specialised scales which diffuse pheromones produced by associated glands. These scales may be scattered or grouped into sex brands.
Aculeae (microtrichia) are also present in the wings of the primitive families.
The edges of both wings are lined by a fringe of cilia which are longer on the dorsum than the costa and in some families the hindwing cilia are longer than the width of the hindwing.

Coupling of the fore-and hindwings in Micropterigidae, Eriocraniidae and Hepialidae is by means of a JUGUM (or fibula*) - a small process from the posteromedial margin of the forewing which rests on the base of the hindwing where it engages with a series of subcostal spines. In most other families coupling involves a FRENULUM arising from the anteromedial border of the hindwing and engaging with a retinaculum on the underside of the forewing. In males the frenulum is usually a single long stout bristle. In females it usually consists of several bristles (most often 3)**. The retinaculum may be a single hooked bristle, a series of hooked hairs or a hooked sclerotised bar.
*not clear to me whether a fibula is synonymous with a jugum, a special case of it or an alternative structure
** some pyraloidea appear to be an exception to this in having a single stout bristle in both sexes
(Work in progress but in Subfamilies: Pyraustinae, Spilomelinae, Glaphyrinae, Scopariinae, Acentropinae and Musotiminae the female frenulum does have 2-4 bristles).

To do:
Forewings to show fasciae and stigmata
Learn more about thoracic structure
Identify jugum and photo 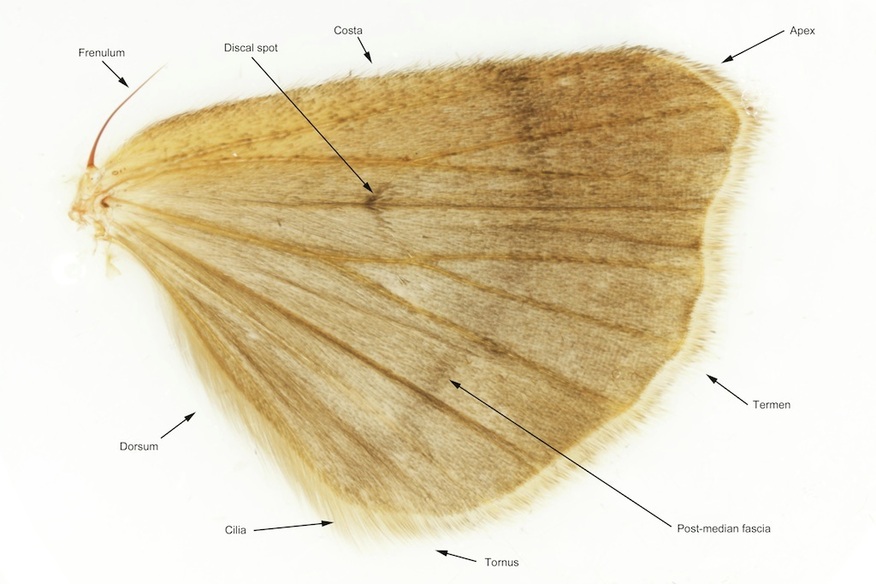 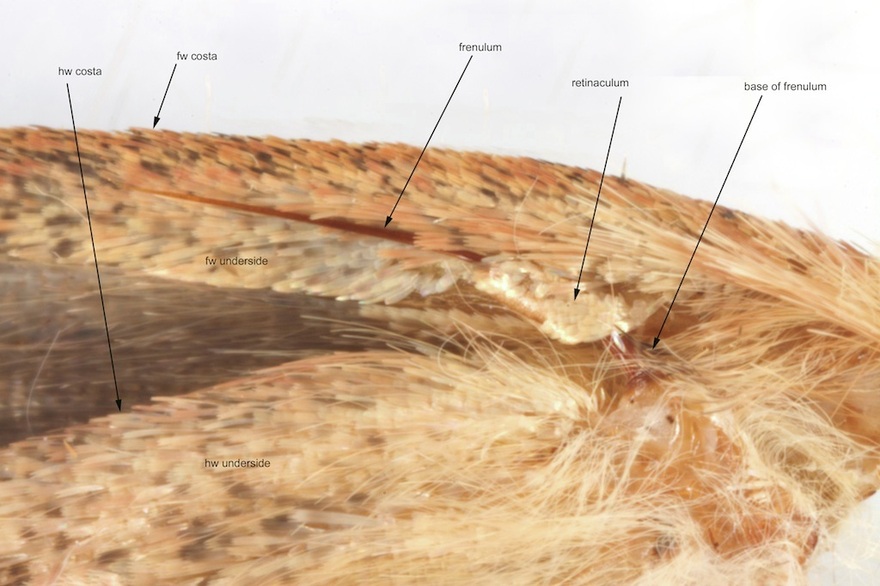 Coupling of forewing and hindwing. Frenulum arises from base of hw costa and engages with a retinaculum on fw underside just inside (posterior to) the fw costa © Chris Lewis 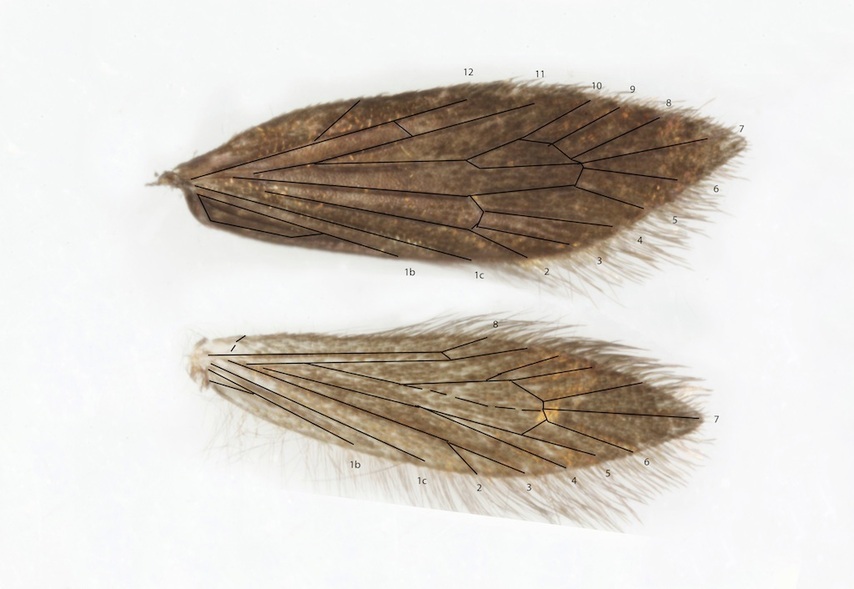 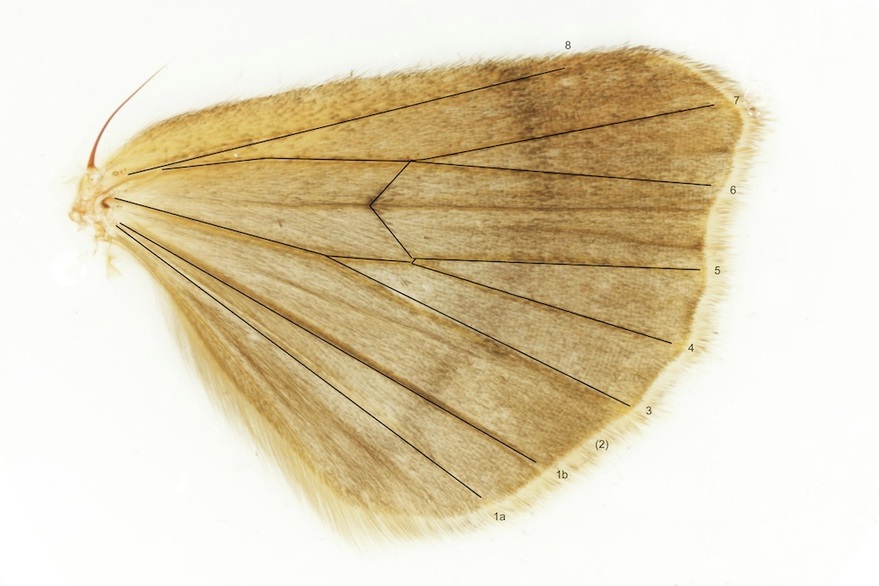 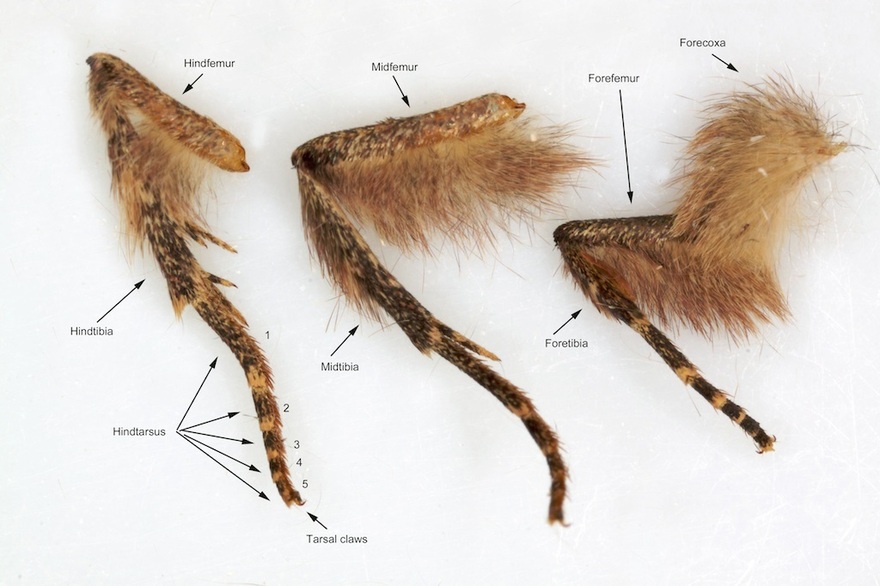 Hindleg, midleg and foreleg (Apamea, Noctuidae) (Note that the trochanter is a small segment, obscured by hair-like scales on the foreleg in this image) © Chris Lewis

Hindleg of Bryotropha similis (Gelechiidae), immersed in oil and labelled. Note that one spur of a pair is usually longer than the other. Note also that the spurs may be naked (as here) or scaled (as above). © Chris Lewis
The photogallery below shows a dissection of the thorax of Euplexia lucipara (Small Angle Shades, Noctuidae). It is apparent that the mesothorax in particular is constructed from a number of plates which I cannot currently label - more study required. For comparison, images of the thoraces of Hepialus humuli and Micropterix aruncella are also shown. These show the larger metathorax of primitive moths. In Hepialus the tegulae are poorly developed. In both Micropterix and Hepialus plates that appear to be homologous with the patagia of more advanced families appear to be integral to the structure of the thorax, forming the dorsal surface of the prothorax, rather than accessories projecting from the dorsal surface. 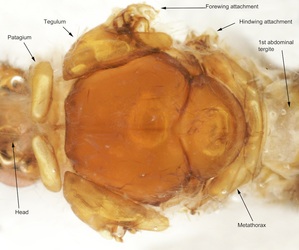 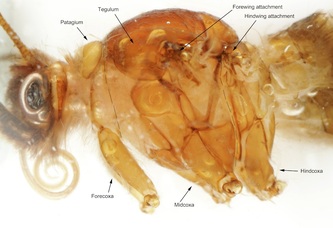 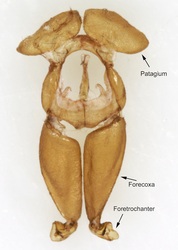 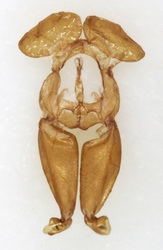 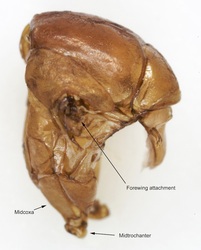 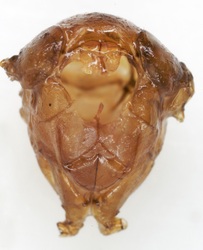 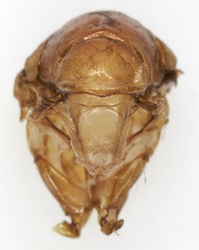 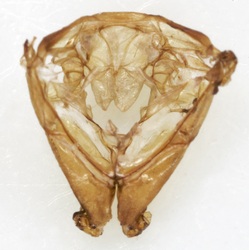 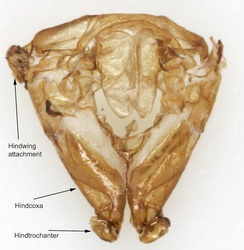 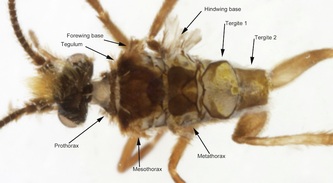 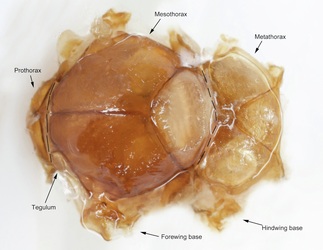