N.trimaculana (ws 15-17mm) is the smallest of the three, but there is considerable overlap in size range with N.rosaecolana (16-20mm), though not with N.roborana (18-21mm) if we believe Clifton & Wheeler, though BTM gives a wider size range (16-22mm) for N.roborana. The costal strigulae in the distal half of the forewing generally consist of alternating broad and narrow marks in all three species, though there is some variation within species in the exact pattern of these markings. In N.rosaecolana the broadest marks are distinctly narrower than those in N.trimaculana/roborana. There are consequently more costal strigulae in N.rosaecolana. BTM also comments that the strigulae are more oblique in N.rosaecolana. Counting costal strigulae from apex to basal patch is complicated by the fact that males have a costal fold and the basal patch extends along the costa between costa and fold*. The costal fold extends to 1/2 in N.trimaculana/roborana and to 2/5 in N.trimaculana. N.trimaculana is also said to have a narrower forewing with a less strongly curved costa than N.rosaecolana.
* Clifton and Wheeler states that this extension of the basal patch along the costa is diagnostic for N.roborana. I think this is incorrect without the further qualifications of fw length (which excludes N.trimaculana) and extent of costal fold (which excludes N.rosaecolana).

Male forewing of N.trimaculana
Costal fold (oblique black line) intersects costa at 1/2 (ratio of origin to intersection : intersection to apex = 0.51 in this example)
Forewing ratio narrow (length - origin to apex : width perpendicular to point of maximum convexity of costa = 2.50 in this example)
Costal strigulae broad: there are 3 broad costal strigulae (numbered 3,4 & 6) and 2 to 4 narrow strigulae between the apical spot (1) and the fold. There is a diffuse broad strigula within the extension of the basal patch along the costa (which is present as a further distinct broad strigula in the female) If this strigula is included there are 4 broad strigulae and ~4 narrow strigulae between the apical spot and the basal patch. 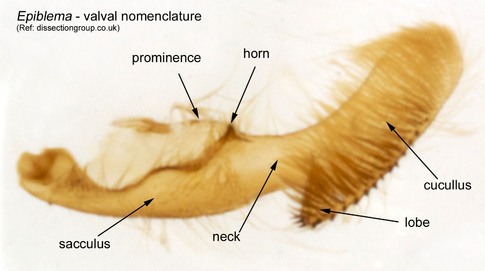 Regarding the whole illustrated part as the valva, N.roborana is readily distinguished by 3 valval features: 1) neck as broad as valva at sacculus*; 2) cucullus short and broad; 3) ventral margin scalloped. In comparison, N.trimaculana/rosaecolana both have a narrowed neck, elongate cucullus and an evenly convex ventral margin; and they are very similar to each other. N.rosaecolana has a pointed cucullar lobe while in N.trimaculana this lobe is rounded. DIssection group give 4 further features which I have so far found unconvincing - features for E.trimaculana given first: 1) sacculus* fairly narrow vs fairly broad; 2) cucullus parallel vs slightly tapering upwards; 3) prominence weakly curved vs strongly curved; 4) socii short vs long.
*Dissection group refers to the sacculus as the whole width of the base of the 'valva'; my understanding is that strictly the sacculus refers only to the ventral portion.