Recently added to the British list Ref: Elliott & Wilson [Ent Rec; 134 (2022) p215 et sec.]
Probably hidden in plain sight and previously regarded as a variant of N. janthe (Lesser Broad-bordered Yellow Underwing)
Whilst on St Mary's, Isles of Scilly, in October 2022, I obtained 3 candidate specimens (2 trapped by myself and 1 by Mick & Will Scott).
For now this page discusses the identity of these 3 specimens (all female) in relation to the features mentioned in the Ent Rec paper and at Moth Dissection
​Unfortunately all 3 specimens were somewhat worn. 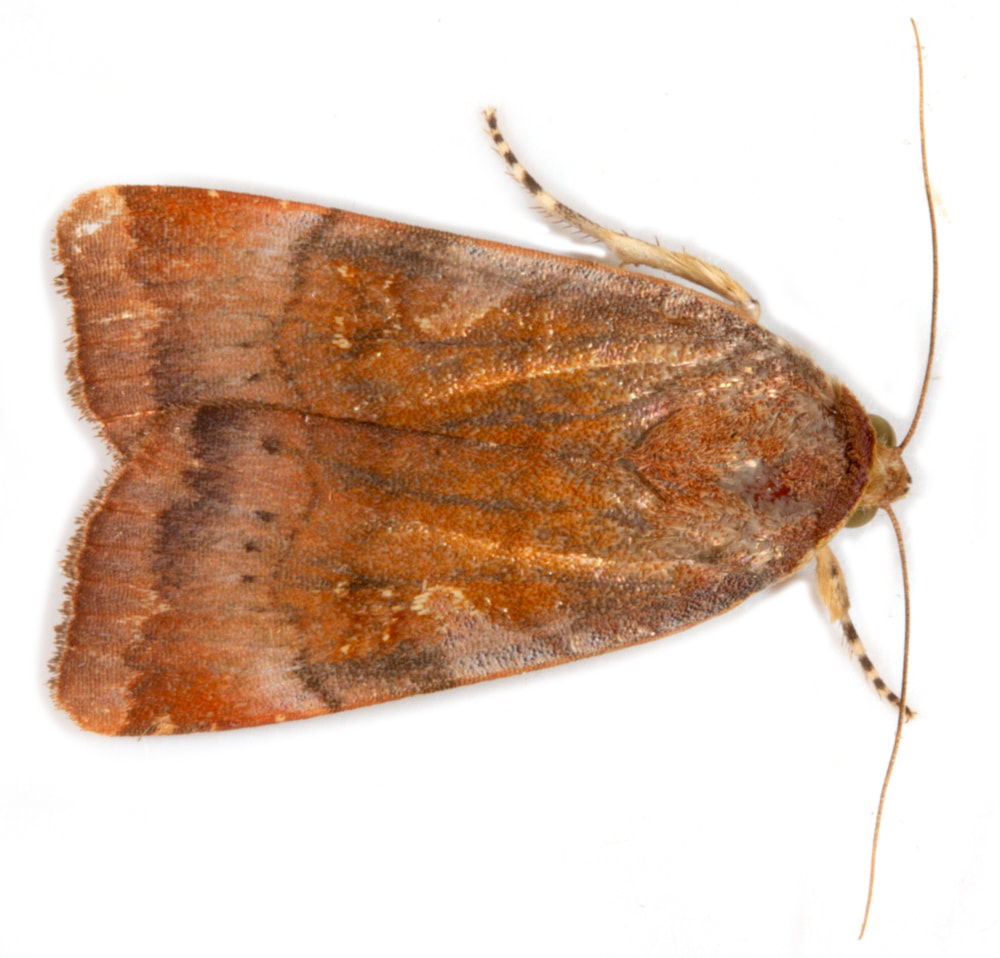 N.tertia candidate §1 female
Summary of ID: Forewing fairly pale reddish; underside black area with a diffuse distal margin lacking finger projections.
​Female genitalia with a broad rounded appendix bursae directed to the left and a generally broad corpus bursae.
Certainty over the identification of the candidate specimens presented here is hampered by discrepancies in the available descriptions and images of the female genitalia of N.janthe.
Forewing upperside
Reddish and paler than the red form of N.janthe.
Note that the wing ratio (length:breadth) of both species appears to be variable and the apparent broader wing of the N.tertia candidate §1 (below) is not a consistent feature of N.tertia (see candidate §2 below)
Forewing underside
In N.janthe the distal edge of the black area shows a series of finger like projections into the reddish-buff terminal zone and the two areas are fairly sharply demarcated. In N.tertia there are no such projections and the junction between the two zones is more blurred.
Hindwing upperside
According to Elliott and Wilson there are two distinguishing features:
1) The black border of the hindwing is broader in N.tertia than in N.janthe. I find this proposition problematic - firstly the black border is of irregular breadth in both species, and secondly there is no discernable or measurable difference in its breadth in the illustrations in the Ent. Rec. paper.
2) While in N.janthe there is a fairly clear area of yellow along the costa between the black border and the radiating black basal patch, in N.tertia the black border continues along the costa almost reaching the black basal patch. I also find this proposition problematic as well as inaccurate. The inaccuracy is that the costa is pale yellow in both species and the proposed difference in black area is subcostal - (the illustration in the Ent Rec paper shows set specimens, in most of which the hindwing costa is concealed by the forewing dorsum). The problematic part is twofold: firstly the illustrations do not show this feature very convincingly, and secondly that none of my three candidate N.tertia specimens show a significant difference with respect to this feature compared with specimens of N.janthe. (It is, of course, an excellent feature for distinguishing N.janthina (Langmaid's Yellow Underwing))
Male genitalia
Elliott and Wilson state that "The male genitalia of all three species is extremely similar, but the everted vesica is different". The paper does not either describe or illustrate this difference. Moth Dissection describes and illustrates a difference in a diverticulum of the vesica (which I find unconvincing or at least very difficult to be confident about). I await examination of males before further/amended comment.
Female genitalia
Elliott and Wilson describe two features for separating N.tertia from N.janthe.

1) Appendix bursae - This is a diverticulum on the left side of the posterior pole of the corpus bursae from which the ductus seminilis emerges. (It is referred to as the "cervix bursae" in the paper). In N.tertia it is "broadly rounded and directed at 100° from the ductus" (ie angled slightly away from the ductus) while in N.janthe it is "directed posteriorly at ~60° to the ductus" (ie distinctly angled towards the ductus). The description doesn't comment on its width and shape in N.janthe, but the illustration suggest that it is less broadly rounded than in N.tertia (the paper indicates that the appendix bursae is clearly narrower in N.janthina). The paper comments that features of the Appendix bursae provide the clearest distinction between the species.
It is not stated how the angulation should be determined. There are three main possibilities: the angle between the ductus and 1) the posterior edge In the appendix, 2) a line drawn along the centre of the long axis of the appendix and 3) the anterior edge of the appendix. Making these measurement for the illustrations in the paper it seems clear that it is option 2) that is intended. The problem then is that determining where the long axis of the appendix lies is to some extent subjective. The measurements for this angle from the illustration in the paper, as best I can judge them, are: for N.janthe is 50° and for the 4 N.tertia specimens 90°. There are three images labelled as N.janthe (female genitalia) at Moth Dissection; two of them show a posterior direction of the appendix with angles of 50 & 60°, in the other it is at 90° to the ductus.

2) Dimensions of the corpus bursae: "altogether wider and more bulbous" in N.tertia, "increasingly bulbous from ductus" in N.janthe. This seems to be an imprecise statement of the differences perceivable from the illustrations. Firstly, it is not clear what is meant by "more bulbous" as distinct from "wider"; secondly "increasingly bulbous" seems to mean "increasingly wide"; thirdly in the illustrated N.janthe the corpus becomes increasingly wide from a narrowing anterior to the appendix bursae, not "from the ductus". I offer the following interpretation of what the paper is proposing: In N.janthe the corpus bursae narrows* anterior to the appendix bursae and then becomes progressively broader anteriorly, while in N.tertia this narrowing is minimal so that the corpus bursae anterior to the appendix appears generally broad with little further expansion anteriorly (ie it is less bulb-shaped). If this were an accurate description and a reliable distinction the ratio of broadest:narrowest part of the corpus bursae should provide an objective absolute measure for confirming ID. However: firstly, calculating these ratios for the illustrations in the paper does not produce any consistent distinction; and secondly, the images of N.janthe at Moth Dissection do not show any significant narrowing anterior to the appendix bursae or any significant broadening from here anteriorly.
* The paper refers to the narrowing as the "neck", (though this is undefined in the paper), which is confusing due to its use of the term "cervix bursae", which means "neck of the bursa", for the appendix bursae.

In distinguishing N.janthe from N.janthina ​both Difficult Species Guide and Moth Dissection describe and illustrate a longer and narrower corpus bursae in N.janthe. I have tried applying the same ratio of the length:breadth of the corpus bursae, used in my janthe vs janthina page, to the illustrations in the Ent Rec paper and found that the value for the N.janthe illustration (3.1) is quite inconsistent with those at DSG/MD (5.5-5.7). However, the illustrations of N.tertia do appear to have a relatively short squat corpus so the possibility that a similar ratio could be applied to N.tertia remains.

The female genitalia of all 3 candidate specimens are shown below together with the specimen from my N.janthe page. They all show a broad rounded appendix bursae directed at 90,60,70&75° to the ductus bursae respectively, and a fairly broad corpus bursae with a little widening from just anterior to the appendix towards a rounded anterior pole. ​The corpus bursae length:breadth ratios for these 4 specimens are 3.24, 3.38, 3.24, 3.0.
I would say that all 4 specimens are the same species, and that none is a good match for N.janthe as illustrated in the Ent Rec paper or at Moth Dissection. All 4 seem to be a good match for the illustrations of N.tertia, even though no measurement can be found to convincingly demonstrate this. The specimen that has been labelled as N.janthe was a very worn reddish individual trapped on 06/10/2020, at the same location on St Mary's IOS, as the N.tertia candidates §1 & §2. If these specimens can be confirmed as N.tertia they would therefore be the first to fourth records of N.tertia for the Isles of Scilly.

I have sent the genital images to Brian Elliott for comment and he believes they are not N.tertia, giving the following reasoning: "The angle of the appendix bursa to the corpus bursa produces a clear angle making a distinct shoulder in tertia ....  The effect of this is to almost make the appendix bursa a distinct chamber from the corpus bursa".
<
> 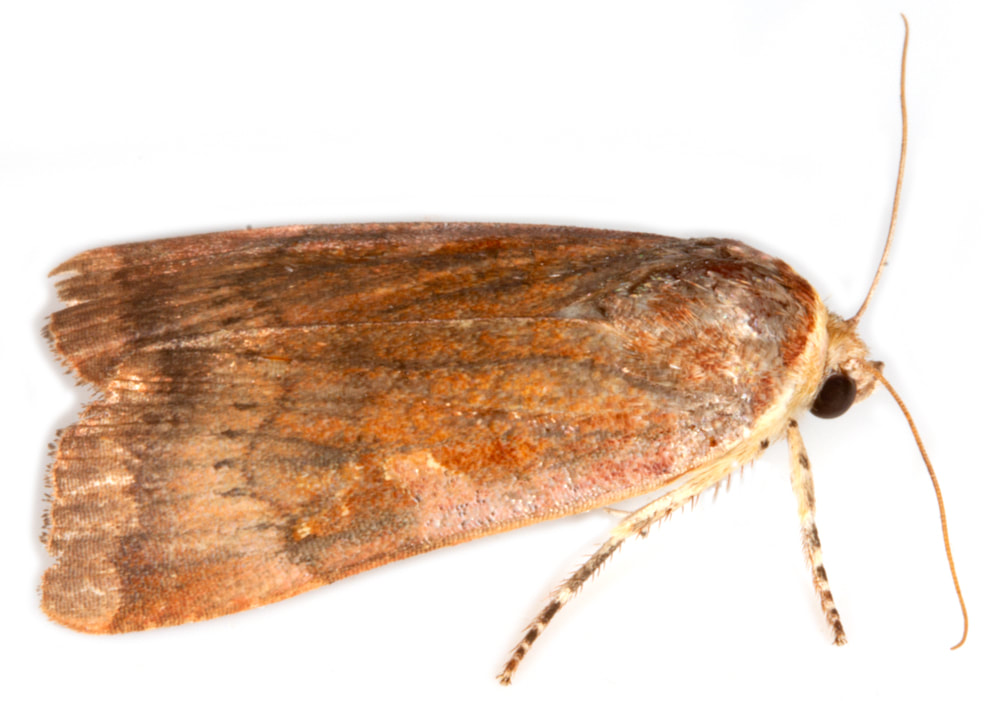