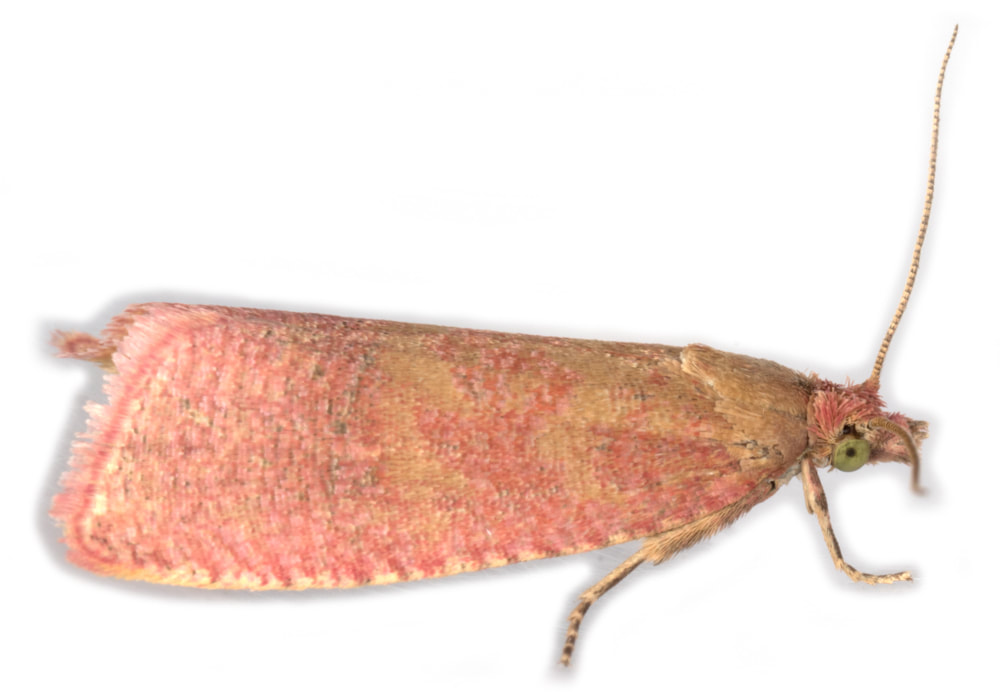 Celypha rosaceana §3 male
ID: Brightness of the pinkish forewing colour varies from bright purplish pink to drab yellowish buff; pinkest when fresh, becoming more drab with wear. Lacks the distinct median fascia shown by C.striana. C.rufana is similar but darker, ranging from dull olive-brown to ferruginous brown and is confined to Wales and NW England. ​C.rufana is also said to have a broader forewing than C.rosaceana (BTM).
Male genitalia: Celypha species differ mainly in the arrangement of the groups of saccular spines. In C.rosaceana there is a group of moderate length stout marginal spines at the ventrolateral angle of the sacculus (Group 1), medial to these is a cluster of long fine spines arising from the ventral surface of the sacculus and directed across the saccular margin away from the valva (Group 2), and a small cluster of short spines arising from the ventral surface of the sacculus between the two previously mentioned groups (Group 3). In C.rufana Group 1 arises from a longer length along the saccular margin so that the length of the origin is greater than the length of the spines - while in C.rosaceana the length of the origin is ~the same as the length of the spines; in C.rufana the spines in Group 2 are of moderate length (ie much shorter than in C.rosaceana), about the same length as group 1 and are directed towards the valva; in C.rufana there is no Group 3. C.striana is very similar to C.rosaceana (and they can be reliably distinguished on external features) - BTM comments that there is no difference in the male or female genitalia between these two species (and they are unhelpfully illustrated on different pages in MBGBI5.2) - however I think they can be distinguished on the relative lengths of the spines in Groups 1 and 2 - Group 2 >2x Group 1 in C.rosaceana; <2x in C.striana (and Group 3 may be absent in C.striana?)
​​Female genitalia: Illustrated in MBGBI5.2 (p344, f184) but this illustration is not very helpful as the peri-ostial sclerotisations are not drawn clearly and it shows the bursa copulatrix of C.rosaceana without a signum (it has one); shown at Moth Dissection, where insets simply (and unhelpfully) labelled "A" and "B" illustrate the difference in the peri-ostial sclerotisation between C.rufana and C.rosaceana. In C.rufana there is a long heavily sclerotised portion of introitus vaginae / ductus bursae extending from the ostium at the the posterior margin of the subgenital plate for ~2x the length of the subgenital plate and there are a pair of heavily sclerotised lateral arcs extending from the ostium to the posterior margin of the subgenital plate. In C.rosaceana the sclerotisation of the introitus vaginae does not extend beyond the subgenital plate and its posterior portion (extending from the ostium) has a poorly sclerotised wedge.
<
> 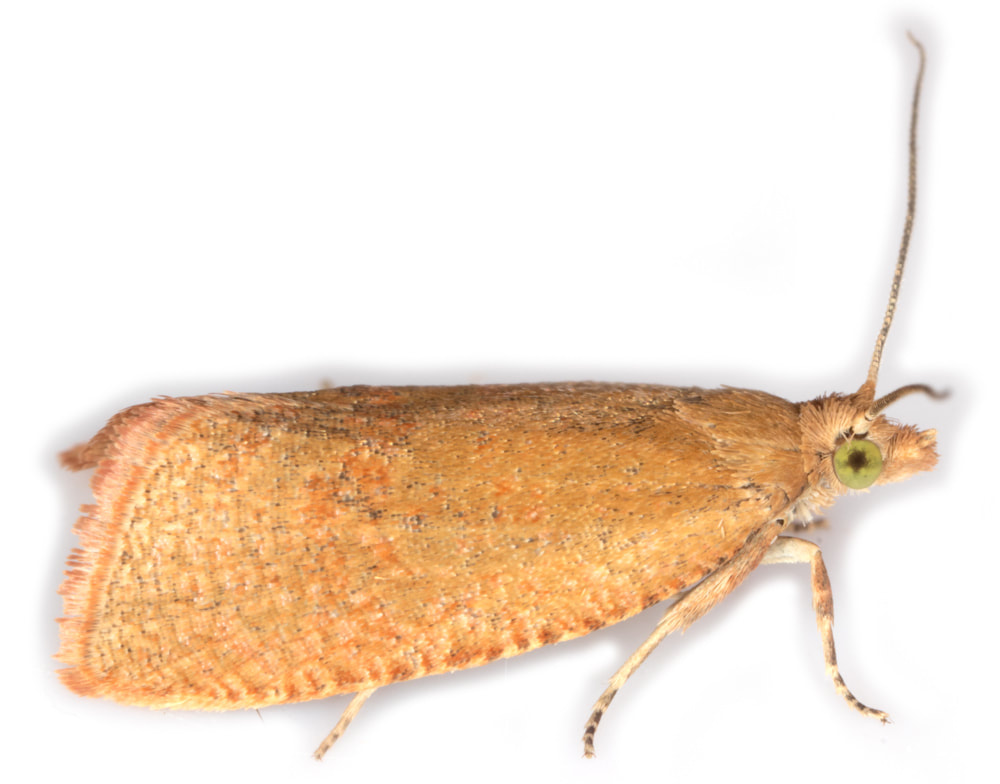 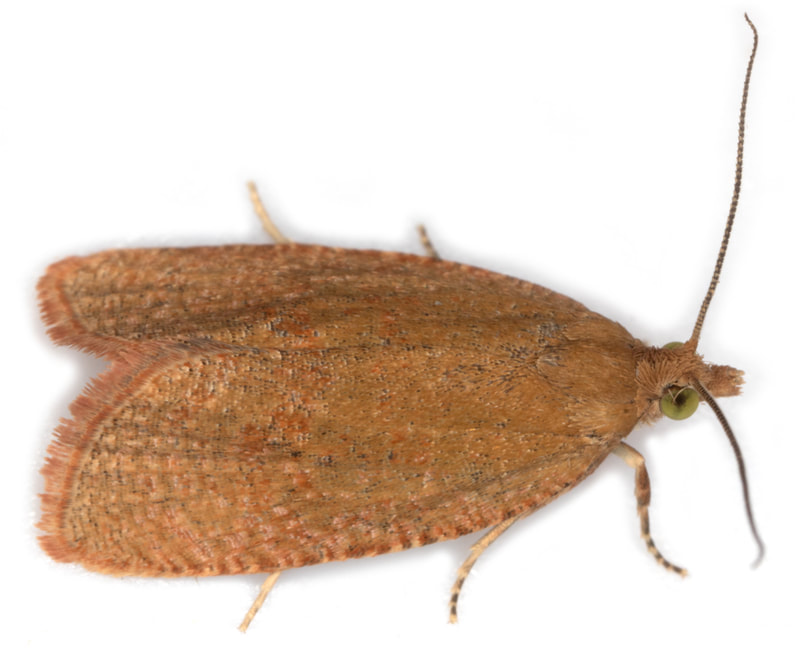 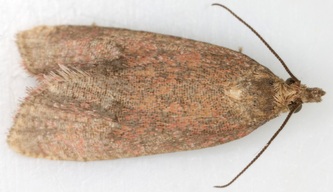 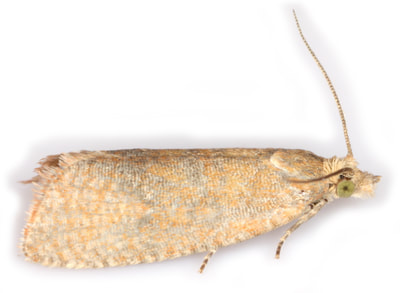 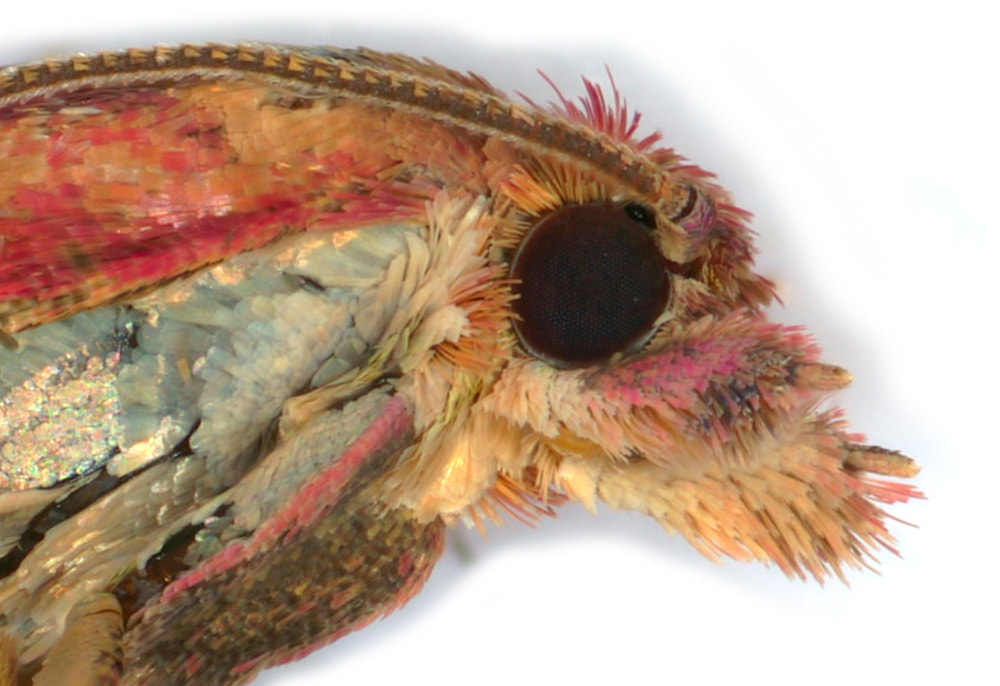 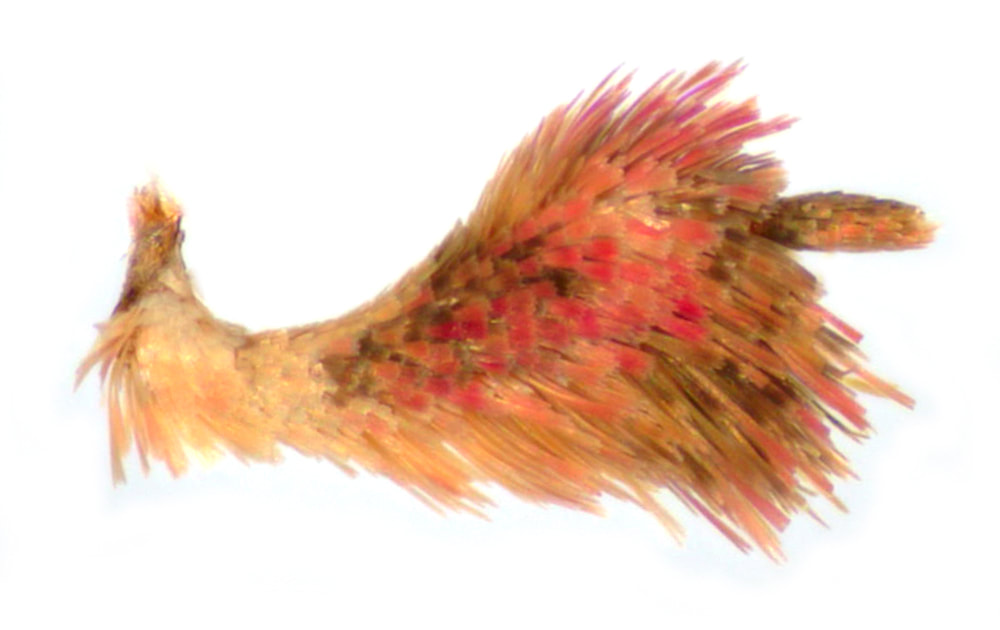 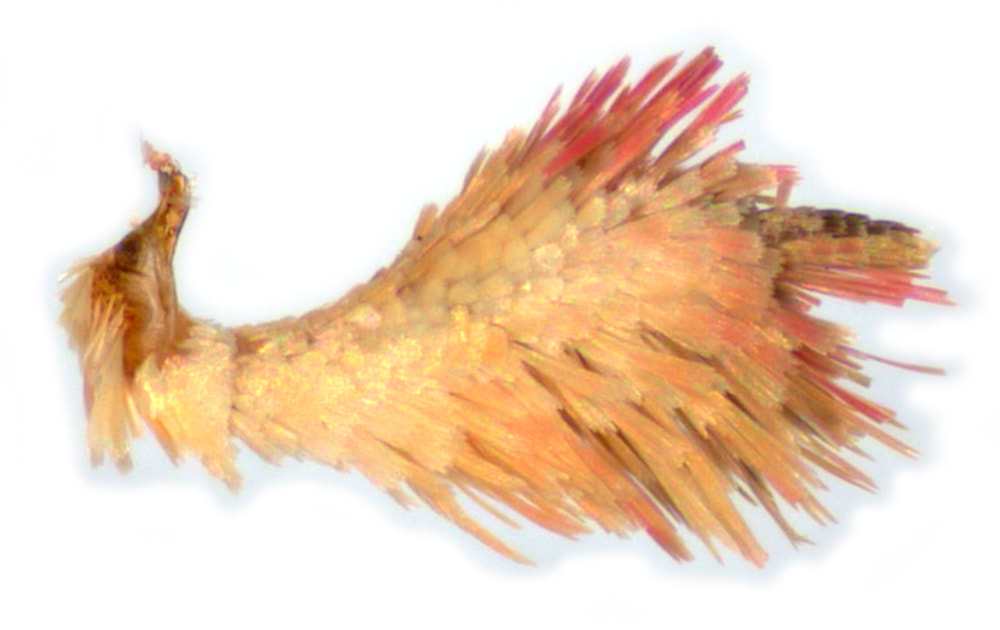 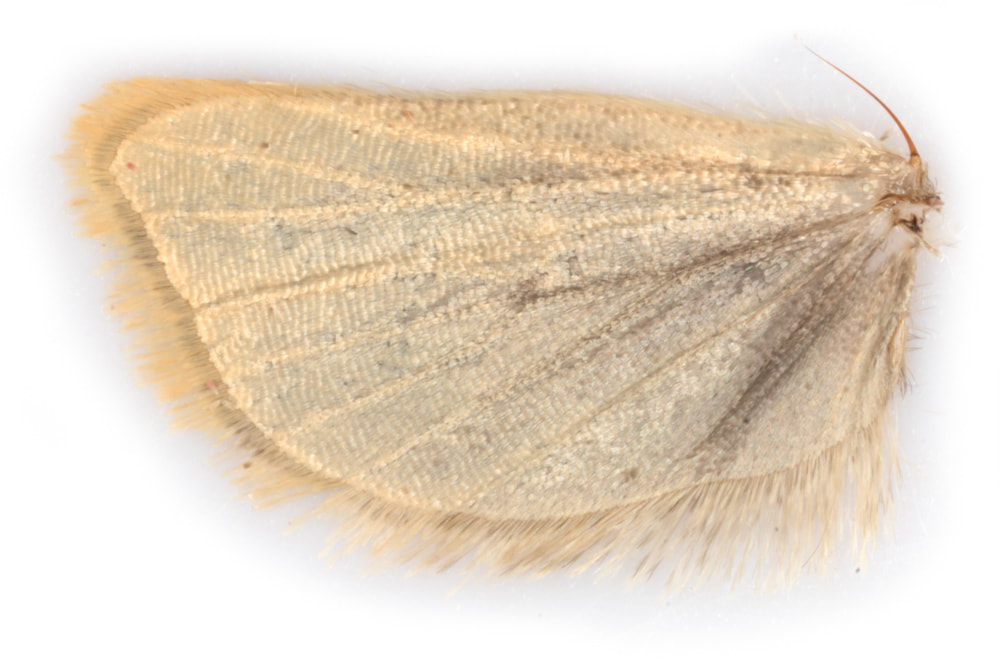 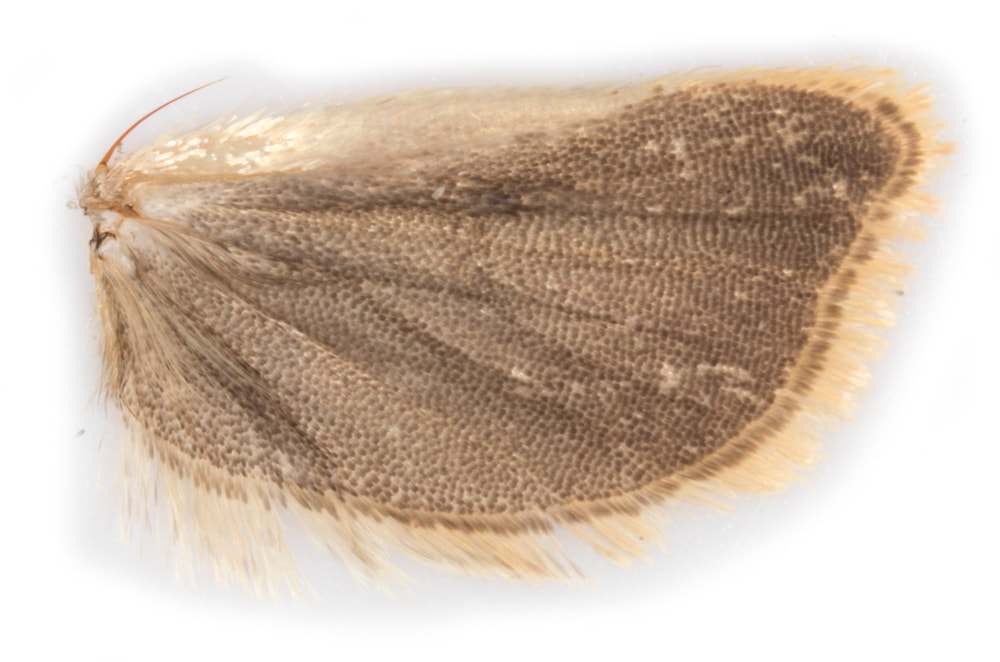 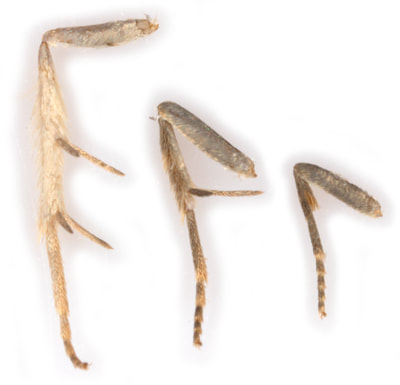 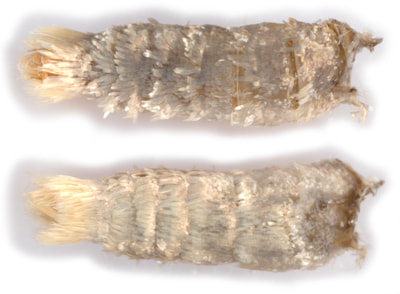 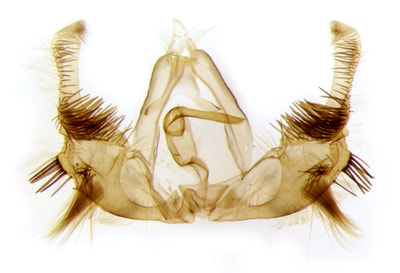 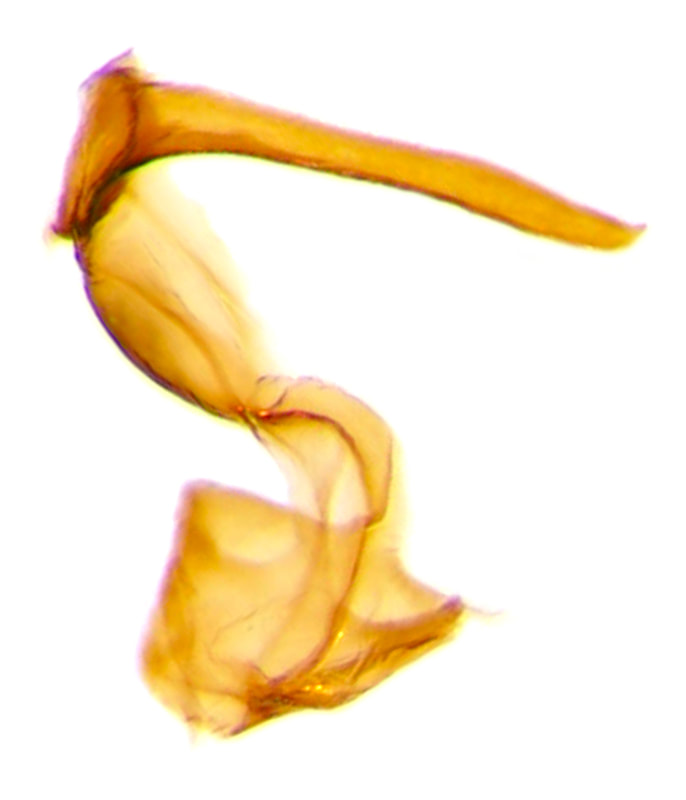 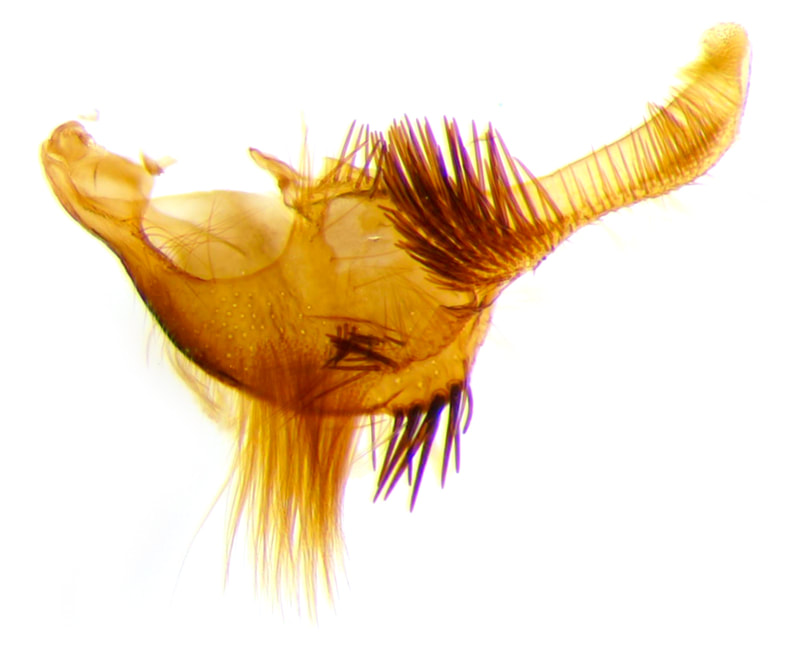