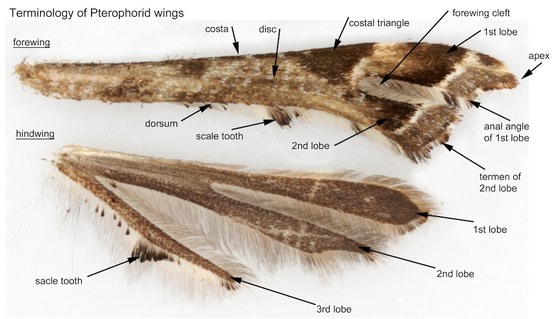 These are the "plume moths'. Genus Agdistis, the sole member of subfamily: Agdistinae, has uncleft wings which are rolled and held forwards at rest, forming a 'Y' shape. The majority of genera are contained in subfamily: Pterophorinae and are readily recognised by their resting posture with the wings narrowly rolled up at held out laterally forming a 'T'-shape. The Pterophorinae have deeply cleft wings, the forewing with 2 lobes, the hindwing with 3 lobes. The cilia are moderately long, often longer than the width of the lobe they edge; they may show dark and light patterns and/or rows of scales forming one or more "scale-teeth". Wing venation is used as a distinguishing character in separating genera. Specialised scales distributed in rows on the underside of the hindwing are present in both males and females of all species. Ocelli absent. Maxillary palps absent. Labial palps 3-segmented, with appressed scales, porrect or ascending. Proboscis well-developed. Antennae range from 1/2 to equal forewing length. Long, slender abdomen and legs; forelegs shortest, hindlegs longest.
I had adopted the Gielis sequencing of genera (based on phylogenetic studies), and species (based on morphology).
The RES checklist, also based on phylogeny has reordered the genera to some extent.
I have grouped the genera of subfamily: Pterophorinae according to their defining features, following the key in Gielis.
However, the features separating the genera are largely based on venation (which I have not yet presented at all) and detail of the genital structure and so are not likely to help in identifying a live moth. The key in Hart is easier to use.
Subfamily: Agdistinae
Wings not cleft; 'Y'-shaped at rest. Forewing with a wedge-shaped, sparsely scaled, "naked field", the base of the wedge being the central part of the termen.
Agdistis (3S [1CI])
Subfamily: Pterophorinae
Wings cleft, forewing with 2 lobes, hindwing with 3 lobes; 'T'-shaped at rest.
Group 1a: 3rd lobe of hindwing with 1 vein; 1st forewing lobe with a well-developed termen
Platyptilia (4S [1IR])
Gillmeria (2S)
Head with frontal scale brush. Palpi long, slender, porrect. Hindwing with weak scale-tooth on dorsum of 3rd lobe.
G.pallidactyla has plain hindlegs, G.ochrodactyla has brown rings on the hindlegs.
Amblyptilia (2S)
Costal triangle well-developed. Forewing V11 present. Hindwing with strong central scale-tooth on dorsum of 3rd lobe (both British species have an addtional scale-tooth on the dorsal side of the apex of the 3rd lobe). A.acanthadactlya is red-brown, A.punctidactyla is brown-grey.
Stenoptilia (10S[1EX,1DB])
Forewing V11 present. 3rd lobe of hindwing without a scale-tooth. Species very similar and probably require genital dissection to separate.
Group 1b: 3rd lobe of hindwing with 1 vein; 1st forewing lobe without a termen
Oxyptilus (2S)
Crombrugghia (2S)
Group 2a: 3rd lobe of hindwing with 2 veins; forewing V7,9&11 (R1,3&5) absent, V6 (M1) absent
Merrifieldia (3S)
Forewing with dark line along costa
Wheeleria
Group 2b: 3rd lobe of hindwing with 2 veins; forewing V11 (R1) absent, V7-10 (R2-5) present; V6 (M1) present
Pselnophorus
Group 2c: 3rd lobe of hindwing with 2 veins; forewing V11 (R1) present, V7-10 (R2-5) present
Subfamily: Agdistinae (1G 2S +1CI)
Agdistis (2S +1CI)