​ws: 16-18mm; Chaenorhinum rubrifolium (a relative of toadflax that does not occur in GB); rare migrant with 6 British records 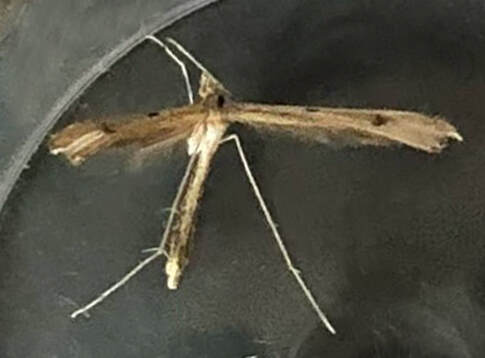 Stenoptilia inopinata §1 female
ID: According to Hart, S.inopinata has a plain brownish-grey forewing with a large black spot at the base of the forewing cleft and few other markings. When I received this specimen I was expecting it to be S.zophodactylus (white saddle) or S.bipunctidactyla (the white saddle may have a darker median line).
​Female genitalia: the fairly long narrow antrum clearly rules out S.zophodactylus. In comparing Moth Dissection images of S.inopinata and S.bipunctidactyla the following features seem to favour S.inopinata:
1. The ventral margin of the dorsolateral plate of A8 is smoothly concave in its anterior half and comes to a medially-directed sharp point at the anteroventral angle of the plate (this angle is a regular 90° in S.bipunctidactyla).
2. The posterior extension of the dorsal wall of the antrum over the ventral surface of A8 has a rugose surface, its posterolateral margins are ~at 90° to each other with and a blunt midline point. (in S.bipunctidactyla this plate is much less rugose and has a rounded posterior margin).
3. The anterior portion of the ductus bursae is very tightly curved (much less tightly curved in S.bipunctidactyla).
The exact shape of the antrum is less clear-cut. In this specimen the antrum is fairly narrow immediately anterior to the ostium, narrows further in its posterior half and is then parallel-sided to its junction with the anterior portion of the ductus bursae. In S.bipunctidactyla the antrum is relatively broad at the ostium and tapers gradually throughout its length. In the images of S.inopinata at Moth Dissection the antrum is relatively narrow but also tapers gradually throughout its length.
Colin Hart (personal communication) comments: "This is a very difficult species to identify but, considering all the features, I think your identification is correct. The only inconsistent feature is the shape of the antrum, which in your specimen is strongly cup-shaped at the posterior end and parallel-sided at the anterior end. I’ve only seen a few specimens of inopinata but none were like this. Arenberger in his Microlepidoptera Palaearctica vol. 12 Pterophoridae III illustrates over 80 Palaearctic species but none of the female antrums (sic) look like your photo. I can only conclude it was malformed or distorted during slide preparation (unlikely, as it is a fairly rigid organ). I attach a slide image (from Kent) so you can compare it with yours. Also the shape, colour and pattern of the forewing are quite a good match with one of the better specimens I have identified (my slide 1113)".
I would just add that I also think it is unlikely that the antrum was malformed or distorted during prep.
<
> 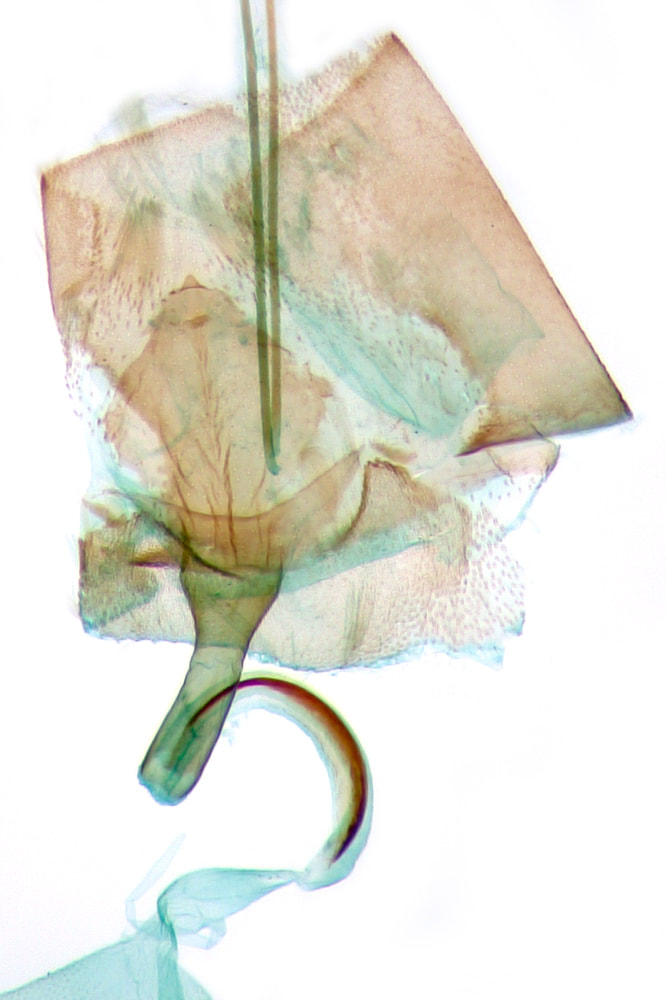