Elachista bedelella §1 male
ID: Keyed in MBGBI3 as - forewing dark with a pale transverse fascia, pale costal and tornal spots but pale markings not involving bases of terminal or apical cilia and without a metallic sheen; frons dark (in the key, but "white to whitish-buff" in the species description!); apical cilia white beyond a dark ciliary line > E.bedelella/littoricola. Unlikely to be identifiable from this key and genital dissection required for identification anyway. Keys in my Group G. More ochreous-brown than most species in this group. E.littoricola is restricted to the Hampshire coast.
​Male genitalia: Both E.bedellella and E.littoricola differ from all other Elachista in the long narrow cleft between elongate uncus lobes; (both also have a strongly sinuate dorsal margin to the valva, but this feature is seen in several other species). E.bedelella is unique in having elongate juxta lobes and in the shape of the apex of the aedeagus which has a single small cornutus. 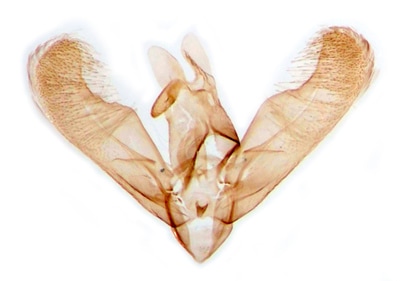 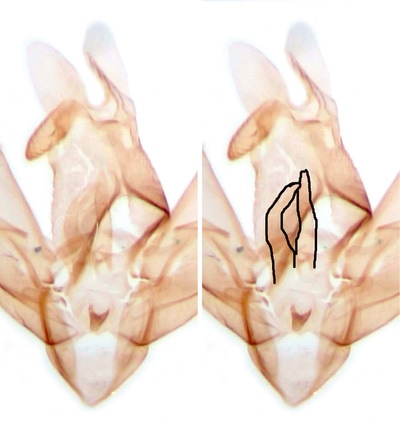