Nomenclature
The sclerotised parts of the male genital capsule consists of dorsal and ventral plates of S9 - the TEGUMEN and VINCULUM respectively - and projections from them. The range of modification across lepidopteran families and genera within familIes, through elaboration or obsolescence of the structures named below, is extensive
The UNCUS is a midline posteroapical extension of the tegumen, derived from the dorsal plate of S10. The GNATHOS is a midline anterior extension of the tegumen, derived from the ventral plate of S10. SOCII are paired appendages arising from the base of the uncus.
The ANAL TUBE emerges between the uncus and the gnathos.
Paired VALVAE are articulated posteriorly with the tegumen and function as claspers during copulation. They are derived as appendages (gonopods) of S9. The terminology used to describe parts of the valvae varies to some extent from family to family, mostly depending on the degree of differentiation of a separate anteroventral or anterobasal SACCULUS. A sclerotised bar along the dorsal / posterior margin of the valva is termed the COSTA (note that the costa of the wings is ventral / anterior). A discrete dorsoapical or apical part of the valva may be termed the CUCULLUS. HARPE is poorly defined but usually refers to a sclerotised process of the valva that arises centrally from the inner surface of the valva. Other terms such as 'valvula' and 'ampulla' have been used inconsistently and are best avoided.
The TRANSTILLA is a sclerotised bar connecting the baso-dorsal corners of the valvae. It passes dorsal to the aedeagus. Often the central portion of the transtilla is not sclerotised so that it appears as paired valve processes and sometimes the transtilla has paired processes of its own.
The valvae have a membranous connection anteriorly to another sclerotised plate - the JUXTA which provides a ventral support to the aedeagus.
The Juxta may be produced into paired JUXTA LOBES
The juxta and transtilla may be fused into an ANNELLUS which may be tubular around the aedeagus.
The SACCUS is an anterior extension of the vinculum.
The AEDEAGUS (penis) emerges through the ring formed by the tegumen and vinculum, between the juxta (which supports it ventrally) and the transtilla (dorsally). It consists of a sclerotised sheath which may have keeled (carinate) projections, and a membranous vesica to the inner surface of which may be attached CORNUTI (thorns) of various sizes. The base of the aedeagus (bulb) has an opening in the sheath through which the vesica is connected to the ductus ejaculatorius (ejaculatory duct).
Preparation and Presentation
The technique I use to prepare male genitalia for photography is as follows: 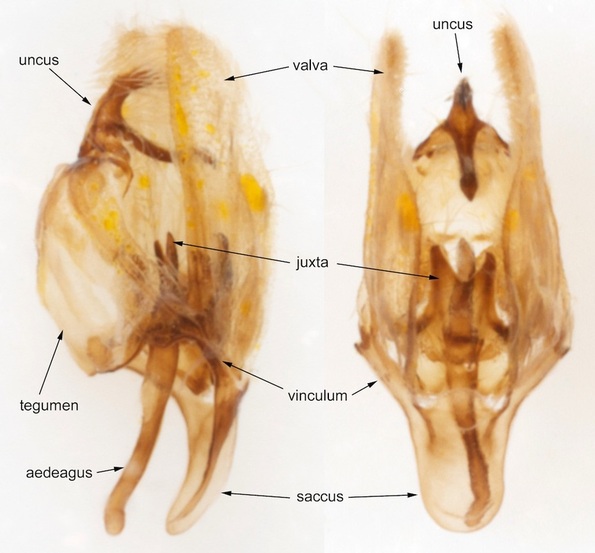 This example is Theria primaria (Early Moth), from Family Geometridae, chosen for no other reason than availability at time of writing.
The traditional technique for preparing and presenting male genitalia would now be to clean up the specimen, open the valva to reveal the inner aspects of the capsule and squash it flat under a cover slip. This technique attempts to present a 3-dimensional structure in 2-dimensions; inevitably deforms structures that are quite often reluctant to lay flat and fails to reveal any detail of the outer aspects of the capsule.
With modern photographic equipment I think it should be possible to capture more of the detail of the genital structure without deforming it - but this is work-in-progress. 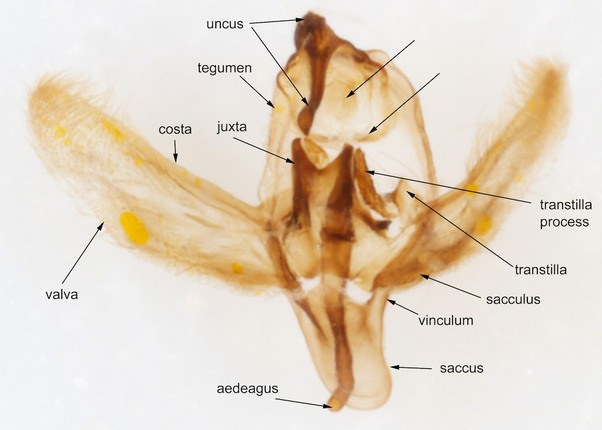 This is close to the traditional view and is relatively easy to achieve when the valva is as simple as this one. It would be more traditional here to twist the tegumen so that the uncus could be seen side-on. I have achieved the same end for some of my preparations by detaching one of the junctions between the tegumen and the vinculum and turning the whole tegumen into side view rather than by twisting the tegumen. Another technique is to remove one valva leaving the other to be viewed flat while the whole tegumen-vinculum complex is view side-on - again avoiding deformation of the structures as far as possible. 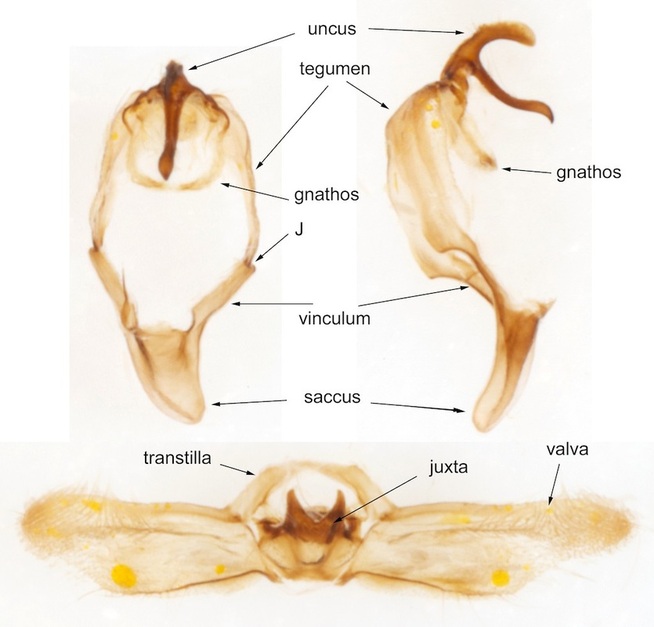