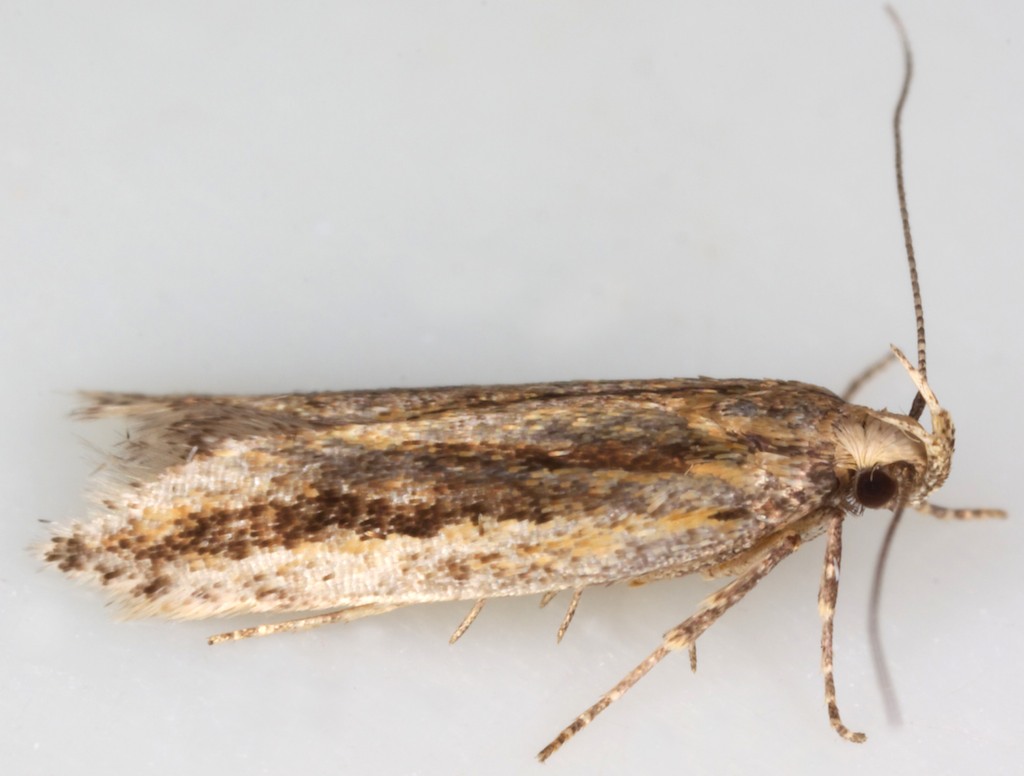 Mirificarma mulinella §1 female
Generic features: Antenna without pecten; Ocelli present; Labial palp recurved; S2=S3; S2 usually without ventral brush
Forewing V7&8 on a long common stalk; V3&4 separate
Male genitalia: valvae tubular; posterior margin of vinculum with broad central process; stout filament arising from base of valva/sacculus.
ID: Forewing pattern variable and may be similar to M.lentiginosella. M.mulinella usually has a median longitudinal dark stripe, which may or may not be broken. M.lentiginosella is dark brown with scattered pinkish-buff scales.
Male genitalia: The genus is characterised by possession of a filament arising from the base of the valva/sacculus; in M.mulinella this filament is straight or gently curved and does not reach the hind edge of the vinculum; in M.lentiginosella it is straight for most of its length and strongly kinked at the apex and extends at least as far as the hind edge of the vinculum.
Female genitalia: In M.mulinella the sclerotised section of the ductus bursae is less than twice the length of the anterior apophysis and the ductus bursae is without a signum. In M.lentiginosella the sclerotised section of the ductus bursae is ~3x length of anterior apophysis and the corpus bursae has a small rectangular signum. MBGBI4.2 refers to differences in the length of the "antrum" relative to the length of the apophyses anteriores. My understanding is that the "antrum" is equivalent to the "introitus vaginae" which is essentially a broad posterior portion of the ductus bursae in continuity with the ostium bursae. The drawing in MBGBI4.2 (fig 31e) of M.lentiginosella shows a fairly short broad posterior section of the ductus bursae and a long sclerotised narrow section - but the text implies that it is referring to the entire sclerotised section of the ductus as the "antrum". I think this is incorrect. The text does not refer to the signum - is this a variable feature?
<
> 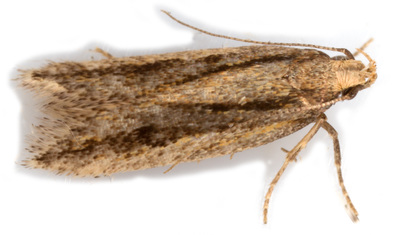 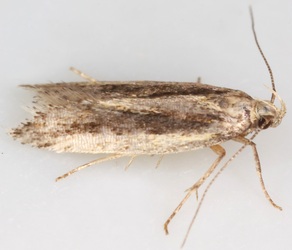 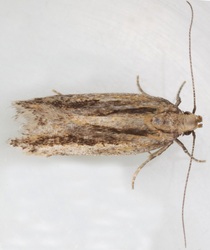 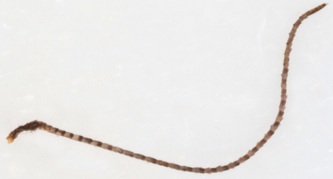 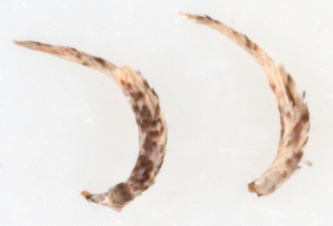 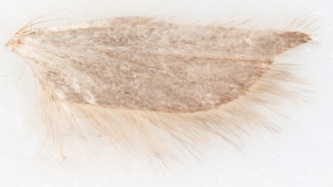 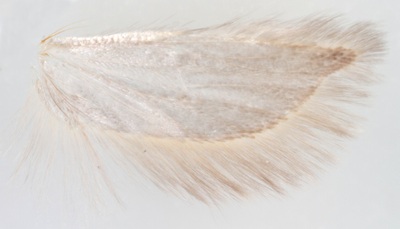 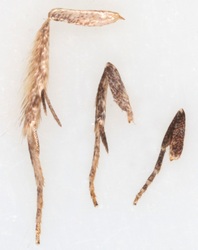 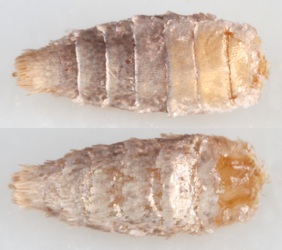 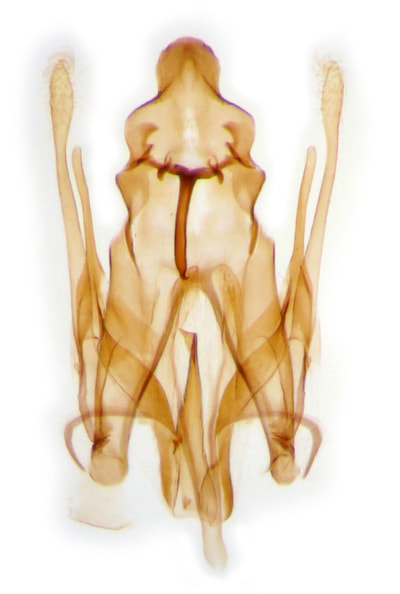 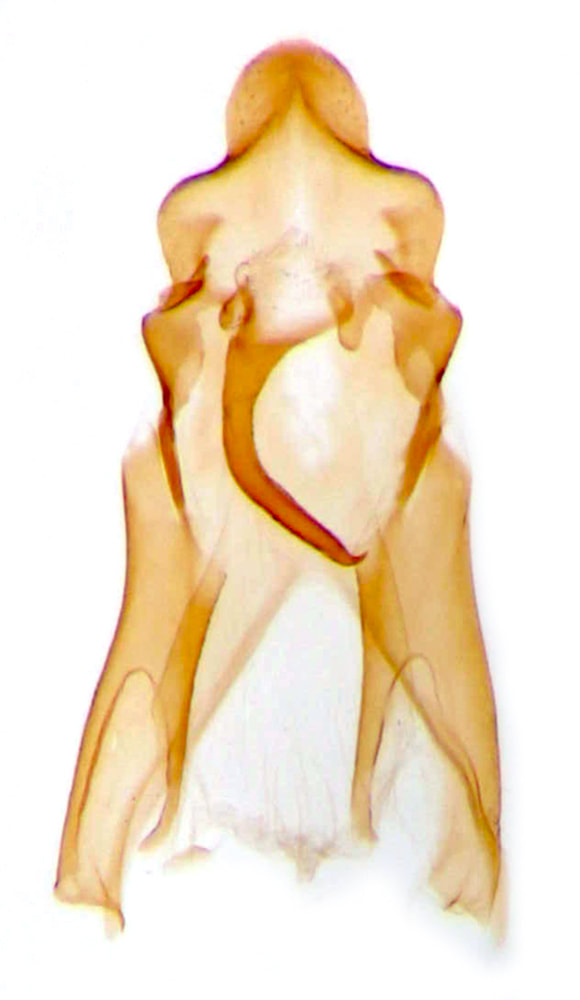 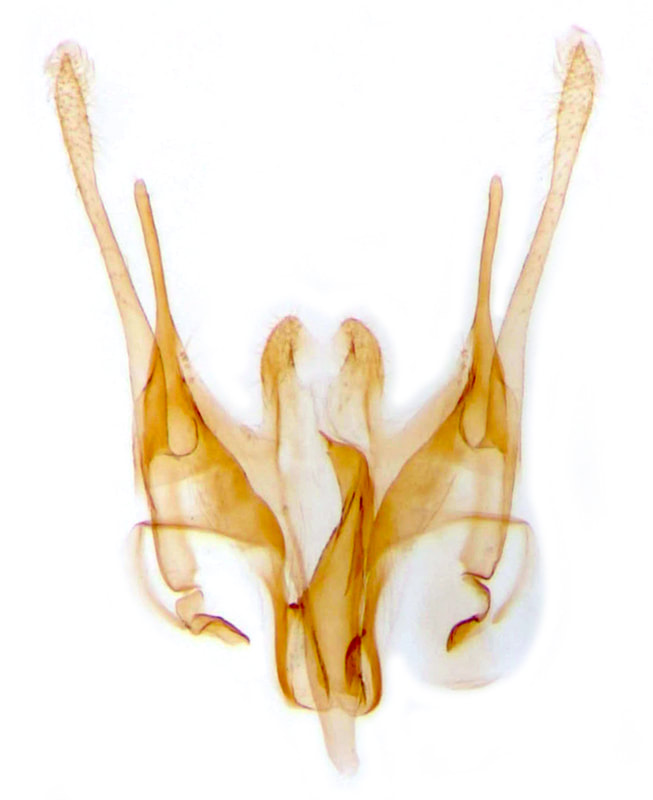