Identification of four of the 7 British Macaria species is straightforward. This page is predominantly to aid in the distinction of M.notata/alternata (Peacock Moth / Sharp-angled Peacock). The extremely rare migrant M.signaria (Dusky Peacock) is also mentioned.
Combining features in Waring & Townsend and the Difficult Species Guide (DSG) the following may distinguish M.notata/alternata:
1. Terminal dark line of hindwing continuous in M.notata, broken or dashed in M.alternata - this difference may be more apparent on the underside.
2. M.alternata has a grey post-median fascia running through the paw-print and “continuing” across the hindwing. How this differs from M.notata is not mentioned in Waring; by comparison of the illustrations in Waring and the images at UKMoths it seems that the grey fascia in M.alternata is 'solid', about as broad as the paw-print mark and of fairly even breadth; in M.notata the equivalent fascia is more diffuse and of variable breadth. This difference can be seen on the images of the whole specimens above.
3. Dark edging of the concavity is blackish in M.alternata and brownish in M.notata;
4. Apical concavity shallower in M.notata, deeper in M.alternata.
5. Paw-print mark is smaller and less well formed in M.alternata;
6. Brown blotch a square in M.notata, narrower and more tapered in M.alternata. I have not been convinced of this difference in the limited number of specimens I have examined.
DSG comments that these features become variable and deceptive with even a little wear and suggests that the hindwing terminal line is the most reliable feature but that no one feature on its own is entirely reliable.
Male genitalia: I have yet to be convinced of any reliably diagnostic difference between these species.
Pierce mentions and illustrates differences in shape of S8 ventral plate, 3 papillae on the sacculus and shape of the aedeagus.
1. S8 ventral plate described as "deeply cleft, inner edged emarginate" for M.notata; "deeply cleft" for M.alternata. DSG uses this feature as the main diagnostic feature for separating the species and describes the difference as "lobes set wide apart" in M.notata and "lobes set close together" in M.alternata. DSG further comments that accurate comparison relies on the preparation being set flat (this may not have been achieved in the image of M.notata presented at Dissection Group). The DSG description is somewhat ambiguous and could be interpreted as: with S8 ventral plate set flat, in M.notata the bases of the lobes are not in contact across the cleft between the lobes, while in M.alternata the bases of the lobes are in contact across the cleft (but note that the illustrations in Pierce show no contact across the cleft in either species, the shape of the apex of the lobes being more rounded in M.notata and more angular in M.alternata) OR it could mean that the distance between the apices of the lobes is greater in M.notata which would make the ratio inter-apical distance/depth of cleft the diagnostic difference. Although the images in the DSG paper illustrate both these differences, I have not been able to replicate them with my own material (see below).
2. The 1st saccular papilla is at the junction of costa and valva, 2nd near distal end of sacculus, 3rd on "inner edge" of sacculus. In M.notata - "1st papilla raised, 2nd papilla raised, 3rd papilla single lobe, spined"; in M.alternata - "1st papilla raised, broad, 2nd papilla small, scobinate, 3rd papilla broad, sometimes divided into two, bearing large spines". These differences are almost certainly not reliable. In specimen §1 of M.notata the papillae were asymmetric in the left and right sacculae of the same individual, so finding convincing differences to use in separating the species seems unlikely.
3. Aedeagus - in M.notata - "short, pointed"; in M.alternata - "pointed". The illustrations in Pierce show the apical point to be central in M.notata and on one edge in M.alternata. No clear difference is seen in the images at Dissection Group. The difference shown by Pierce may be attributable to rotation of the specimen.
The images at dissection group show a pair of spines (socii?) at the apex of the uncus in M.notata and a single-spined uncus in M.alternata - this difference appears to be an artefact. Both species have a pair of spines projecting dorsally from the apex of the uncus.
The difficulty in using the S8 ventral plate is illustrated in the gallery below. All three images are of the same specimen I believe to be M.notata.
The left image shows the plate as it is 'naturally' after dissection; the middle image shows the plate flattened (stained mercurocrome); and the right image shows the plate flattened and dried. 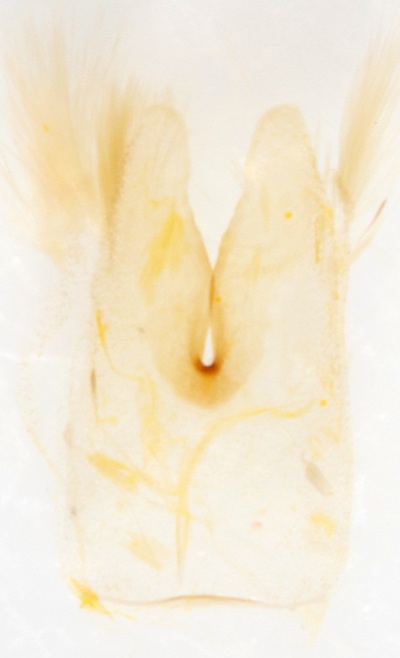 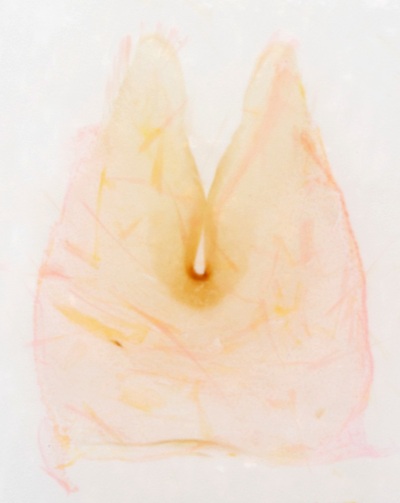 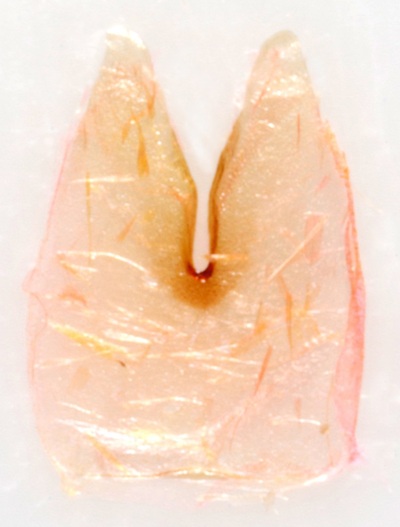 Here is a similar series from an individual that on external appearances is M.alternata (§4). Note the emarginate inner edge in this specimen - which according to the description in Pierce should make it M.notata; and note that the dried plate could be set both with the inner edges touching and apart (right two images). 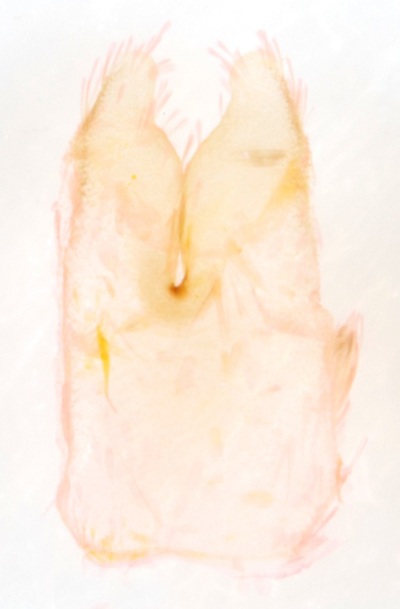 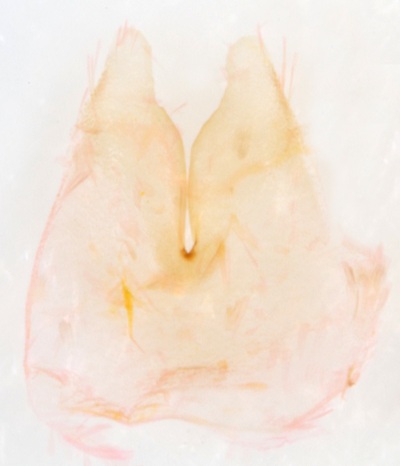 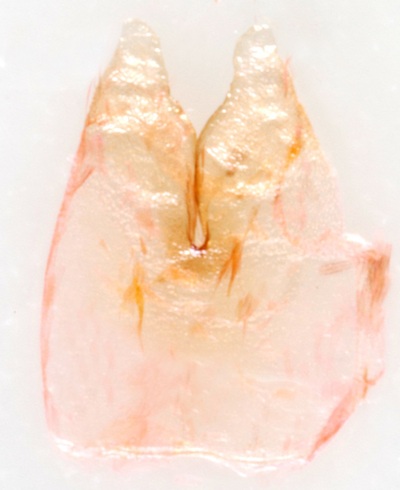 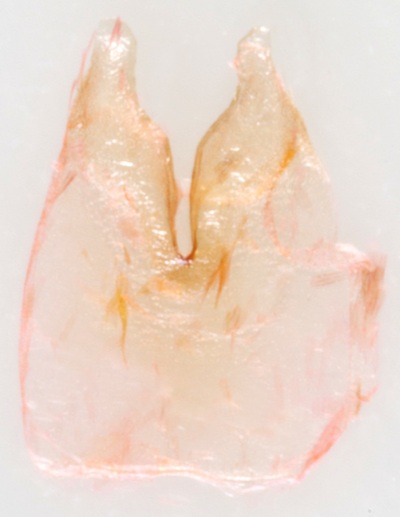 And these are also taken from specimens I have identified as M.alternata. The left and middle image are the same individual. 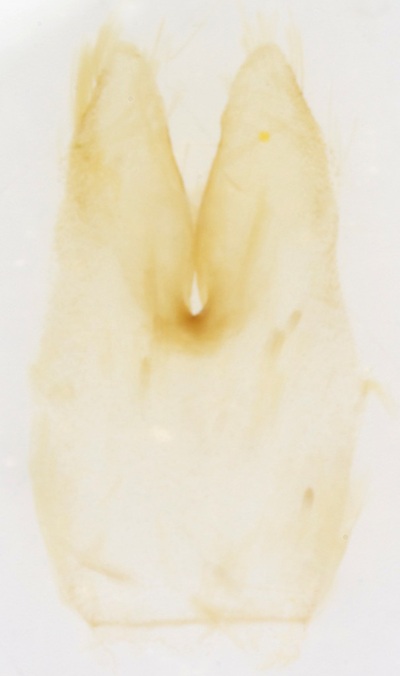 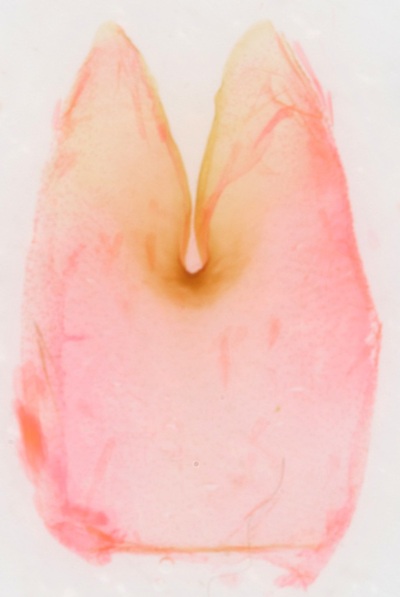 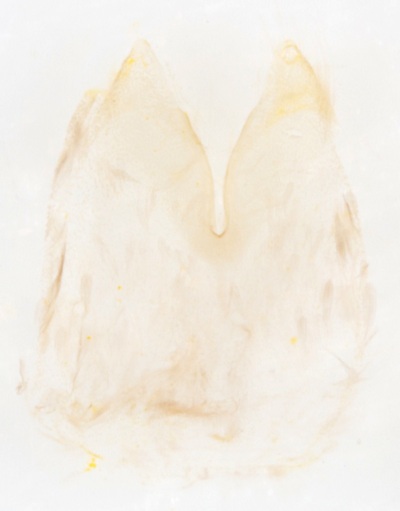