Facial Cone:
The presence of a prominent 'facial cone' indicates A.tristella and its absence A.selasella
The facial cone is "a scale-covered conical projection on the front of the head" (Ref: Goater, glossary).
This is unlikely to be a useful feature when assessing images of live moths.
Note that the facial cone is nothing to do with the conical shape made by the labial palps projecting in front of the head.
This is the only absolute non-genital distinction between these two species (as far as I have yet discovered, but read on...) 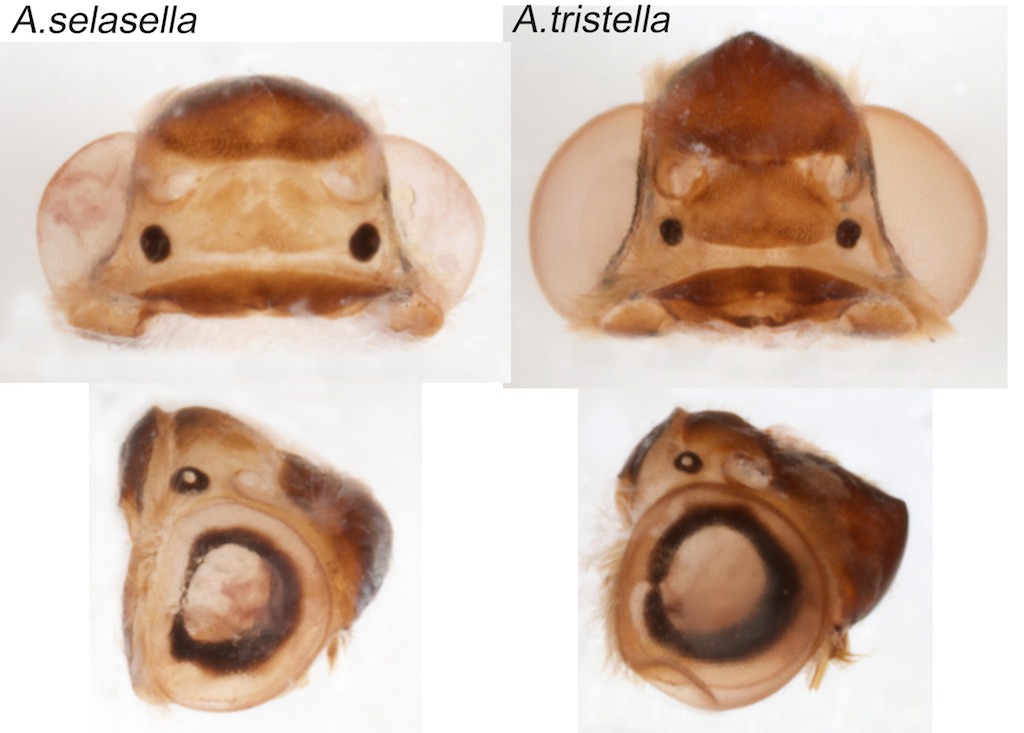 Other forewing features (A.selasella given first):
Termen angle with costa: ~ close to right angles vs distinctly acute; Termen: rounded vs straight; Texture: smooth vs rough
The ground colour at the costal edge of the median streak is darkened in A.selasella. When this is the only distinctly darkened area of the wing this should support identification as A.selasella. However, this dark line is sometimes indistinct in A.selasella and often present as one of several dark markings between the veins in A.tristella.
Ref: Goater, the Berkshire moth group excellent guide to Grass Moths:
(Note that Goater incorrectly gives A.tristella as having the more rounded termen).

These forewing features are not always easy to be sure of however. Here is an example of A.tristella which not only has a pure white median streak but also has an apical angle approaching 90 degrees and a somewhat rounded termen
Size: - Small individuals (fw < 12mm) are likely to be A.selasella. ws 22-30mm vs 25-30mm
Habitat - A.selasella is local on saltmarsh/fen/freshmarsh; individuals away from these habitats should be A.tristella but in these habitats both species occur.
Male Genitalia:
From my own observation and comparison with the male genital images at Moth Dissection, I believe the following features distinguish the species, features for A.selasella given first:
1. Aedeagus without cornuti vs with with many small cornuti
2. Projection from base of dorsal margin of valva rounded at apex vs pointed at apex
3. 'Blob' at end of gnathos triangular vs rounded
Other differences seen in the images at dissection group seem to be artefacts of the preparation technique:
i. Uncus same length as tegumen vs uncus shorter than tegumen (~4/9)
ii. Uncus narrow (5x longer than broad) vs uncus broader (4x longer than broad)
iii. Sclerotised point at apex of concave side of aedeagus vs this point subapical
Female Genitalia:
Comparative images are available at Moth Dissection. It is not entirely clear from these images what the critical identification feature(s) is/(are).
A difference that is consistent with my material is that in A.selasella the sclerotised section of ductus bursae is shorter than the diameter of the antrum, while in A.tristella the sclerotised section of the ductus bursae is equal to or slightly longer than the diameter of the antrum.
An apparent difference between the species in the depth of the antrum is the opposite way round in my material c/w Moth Dissection and so is probably artefactual? It is also possible that the signum is distinctly more crenulate in A.tristella.
All images © Chris Lewis
Page published 02/11/2012 | Male genital image for A.selasella added and text modified 06/11/2012 | Text modified 10/06/2019